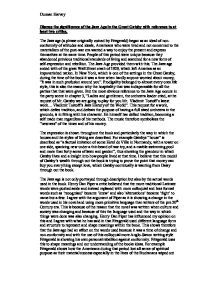 Discuss the significance of the Jazz Age in the Great Gatsby with reference to at least two critics.

Discuss the significance of the Jazz Age in the Great Gatsby with reference to at least two critics. The Jazz age (a phrase originally coined by Fitzgerald) began as an ideal of non-conformity of attitudes and ideals, Americans who were tired and not concerned to the materialism of the post-war era wanted a way to enjoy the present and express themselves at the same time. People of this period were unique because they abandoned previous traditional standards of living and searched for a new form of self-expression and rebellion. The Jazz Age provided them with this. The Jazz age ended with of the great Wall Street crash of 1929, which left America as an impoverished nation. In New York, which is one of the settings in the Great Gatsby, during the time of the book it was a time when hardly anyone worried about money, "It was in such profusion around you". Prodigality belonged to almost every ones life style, this is also the reason why the hospitality that was indispensable for all the parties that that were given. But the most obvious reference to the Jazz Age occurs in the party scene in chapter 3, "Ladies and gentlemen, the orchestra leader cried, at the request of Mr. Gatsby we are going to play for you Mr. Vladimir Tostoff's latest work... ...read more.

This shows the rebellion against the law as he is not hiding what he is doing and this tells me that because he does not have any respect for it. As K.P says, she believes that it was because of prohibition that the Jazz age began and that bootleggers were partly to blame. This could confirm the story of Gatsby's mysterious source of wealth as K.P has also put forward the point that he could be based on the great bootlegger of the time Edward Filler who was prolific during the time that the book was written. This could confirm that rumour that Gatsby was a bootlegger as this could be the character that he was based on thus proving that the Jazz age has a lot of significance in the book. This also partly echoed Fitzgeralds life style as he was said to drink heavily even at a time when it was banned. This therefore shows how Gatsby is partly portraying Fitzgeralds own conceptions about the age and of course alcohol. This is again shown at Gatsbys parties where "people are not invited-they went there..... came for the party with a simplicity of heart that was its own ticket of admission." For this spontaneous society Gatsbys huge "party lawn" is an amusement park, a place animated with chatter and laughter where " casual innuendo and introductions forgotten on the spot" are on the agenda. ...read more.

The way in which Fitzgerald writes is done so that it can shape meaning through its language and form. It is particularly prominent during such scenes as Gatsby's parties. The way in which he describes things through colour, for example "blue gardens" and "yellow cocktail music", this is trying to put through the feeling of happiness and the jubilation associated with the summer, especially with the reference to the cocktail music. Everything is seen as bright as even the garden is seen as a "fairground". Also Gatsby lives by the sea and the sun and sand are always yellow and the sea is blue, this therefore leads me to the conclusion that Fitzgerald was trying to make the feeling of the book seem bright at this point in time and to have a feeling of summer sea and sand put forward in it. This use of colour is again prominent in the description of the valley of ashes; he uses dark colours such as grey and black and words such as dank and dismal. This gives the reader a feeling that the valley is a place of sadness where people live in unhygienic hovels with little money. Although I believe that the way that many people look down on those that live there is put through by Fitzgerald as ironic as they soon will have no money left and will be living like that due to the great crash. ...read more.