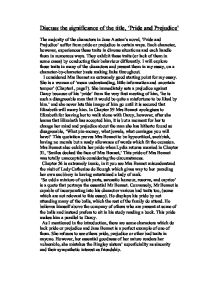 Discuss the significance of the title, 'Pride and Prejudice'.

Discuss the significance of the title, 'Pride and Prejudice' The majority of the characters in Jane Austen's novel, 'Pride and Prejudice' suffer from pride or prejudice in certain ways. Each character, however, experiences these traits in diverse situations and each handle them in numerous ways. They exhibit these traits (or lack of them in some cases) by conducting their behaviour differently. I will explore these traits in many of the characters and present them in my essay, on a character-by-character basis making links throughout. I considered Mrs Bennet an extremely good starting point for my essay. She is a woman of 'mean understanding, little information and uncertain temper' (Chapter1, page7). She immediately sets a prejudice against Darcy because of his 'pride' from the very first meeting of him, 'he is such a disagreeable man that it would be quite a misfortune to be liked by him.' and she never lets this image of him go until it is secured that Elizabeth will marry him. In Chapter 59 Mrs Bennet apologises to Elizabeth for leaving her to walk alone with Darcy, however, after she learns that Elizabeth has accepted him, it is but a moment for her to change her mind and prejudice about the man she has hitherto found so disagreeable, 'What pin-money, what jewels, what carriages you will have!' ...read more.

Mr Collins is the outstanding grotesque of Pride and Prejudice and, suitably, he echoes the title of the novel at every turn of speech and behaviour. Further emphasis on Mr Collins's conceit and shallowness of nature is proved in Chapter 15, he is expressed as a, 'mixture of pride and obsequiousness, self-importance and humility.' And, of course, by Lady Catherine's wishes one of the main reasons as to the visit to Longbourne was to find himself a wife, 'Mr Collins had only to change from Jane to Elizabeth and it was soon done- done while Mrs Bennet was stirring the fire.' Additionally, in Chapter 19, Mr Collins's proposal to Elizabeth, 'in form' is masterly in its pomposity, self-conceit, condescension and crawling subjection to Lady Catherine. Mr Collins blindly attributes Elizabeth's reaction to the 'usual practice of elegant females' His arrogance will not let him allow a refusal. There is no puncturing the caricature of this man; his image of himself is never ruined! My final criticism of Mr Collins comes in Chapter 48. He writes a letter of 'sympathy' about Lydia's elopement to Mr Bennet. It is a letter written by a Christian clergyman which reflects a totally unchristian attitude, and the quote, 'the death of your daughter would have been a blessing in comparison to this,' is the key to Mr Collins's character, he must only be associated with what is highly respectable. ...read more.

Elizabeth's pride and prejudice control the way she handles Darcy's marriage proposal. Her pride forbids her to accept after he has displayed how he thinks she is beneath him, her prejudice playing an important role due to the Wickham affair. In the following chapter Elizabeth receives Darcy's letter. Although she disbelieves Darcy on the subject of Jane, she is forced to consider carefully the statement which relates to Wickham. Her second reading, Wickham's own indiscretion in talking so much to her, the knowledge that Darcy's criticism of her family are justified, force her to see how clearly prejudiced she has been. She also appreciates that her own family has brought about Jane's unhappiness. By far the most moving part of Chapter 50 is Elizabeth's awakening recognition of her family's lack of merit and of Darcy's particular marks of worth. It leads her to be humbled and grieved. And as Darcy was stripped of his pride and prejudice in Chapter 58, Elizabeth is likewise, 'all her former prejudices had been removed.' In conclusion, I note that Jane Austen has used the two main characters to explain the relevance of the title. Jane Austen, by the end of the novel, has achieved the perfect marriage state, Elizabeth and Darcy complement each other entirely now that each has overcome the strength of first impressions and their own pride and prejudice. ...read more.