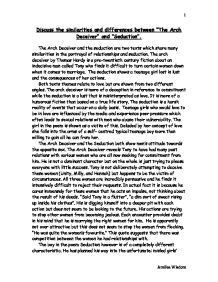 Discuss the similarities and differences between &quot;The Arch Deceiver&quot; and &quot;Seduction&quot;.

Discuss the similarities and differences between "The Arch Deceiver" and "Seduction". The Arch Deceiver and the seduction are two texts which share many similarities in the portrayal of relationships and seduction. The arch deceiver by Thomas Hardy is a pre-twentieth century fiction about an indecisive man called Tony who finds it difficult to turn certain women down when it comes to marriage. The seduction shows a teenage girl lost in lust and the consequences of her actions. Both texts themes relate to love but are shown from two different angles. The arch deceiver is more of a deception in reference to commitment while the seduction is a lust that is misinterpreted as love. It is more of a humorous fiction than based on a true life story. The seduction is a harsh reality of events that occur on a daily basis. Teenage girls who would love to be in love are influenced by the media and experience peer pressure which often leads to sexual relations with men who abuse their vulnerability. The girl in the poem is shown as a victim of this. Deluded by her concept of love she falls into the arms of a self- centred typical teenage boy more than willing to gain all he can from her. ...read more.

vodka) and the entertainment ("the fingers that stroked her neck and thighs"). She is taken in by all her current experiences and will follow without difficulty. Tony is also easily persuaded in the story. All the women he meets on his journey convince him to drive them to their destination. He does not reject them but simply obeys their desires. Unity entices Tony with her beauty using their childhood together as a method of persuasion. Tony has many doubts about his bride as he rides with Hannah, another beauty. While riding with her "he couldn't for the life of him think why he had ever said a word about marriage to Milly or Unity." In a short space of time Tony is convinced his bride should be, first Unity then Milly and now Hannah. He is unsure and confused about what he wants. The ending for Tony has a bright side to it as he does find his bride. Although he suffers many disappointments as do the women he eventually turns down, he does find what he was seeking for... a wife. The girl in the poem however is not as fortunate. Her ending is one of pain, misery and isolation. Her actions have caused an incredible sacrifice which now burdens her as she looks to the future. ...read more.

Although he rejects his fathers' opinion he ends up marrying the girl he recommended in the first place. The ending in the seduction is not one of the joy and happiness as it began with but one of pain and heartfelt misery. It ends in desolation as the girl almost self destructs, willing her life to end because of the future ahead. She wants to "turn away, move away and fade away" frustrated with herself and anticipating the comments and thoughts of other people she no longer wants to be in this position. She is emotionally distressed and is seeking for the way out. She has had a traumatising experience which could change her view of life. Her trust in men could deteriorate as she feels betrayed, cheated and used. Whether she finds the solution to her crisis is a mystery as the poem ends in anguish. She was seduced. Tony Kyte's ending is more of a joyous celebration. After being abandoned by his first two sweet hearts he settles down with Milly and get hitched. Although his events left him nervous and sweating, he got what he desired. This text is not a check of reality but rather a humorous story of a deceitful man who ends up happy. In my opinion Tony should not have got any of the women but should have ended up miserable and alone. He was a subconscious deceiver. 1 Jemilea Wisdom ...read more.