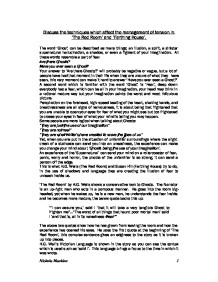 Discuss the techniques which affect the management of tension in 'The Red Room' and 'Farthing House'. The word 'Ghost' can be described as many things; an illusion, a spirit, a sinister supernatural hallucination, a shadow, or even a figment of your imagination. All these words resemble a part of fear. Are there Ghosts? Have you ever seen a Ghost? Your answer to 'Are there Ghosts?' will probably be negative or vague, but a lot of people have had that moment in their life when they are unsure of what they have seen, this very moment can make it hard to answer 'Have you ever seen a Ghost?' A second word which is familiar with the word 'Ghost' is 'Fear', deep down everybody has a fear, which can be all in your imagination, your head may think in a rational mature way but your imagination paints the worst and most ridiculous picture. Perspiration on the forehead, high-speed beating of the heart, shaking hands, and breathlessness are all signs of nervousness, it is about being that frightened that you are unable to open your eyes for fear of what you might see but too frightened to closes your eyes in fear of what your mind is telling you may happen. ...read more.

These characters are described as a man having withered arms, a woman with pale, wide eyes and another man who is wrinkled and bent with decaying yellow teeth and inflamed eyes. They all avoid eye-contact and they distance themselves from each other, this build up the pressure as they are so fearful of the room. These Characters are described so deadly that they almost seem like Ghosts. H.G. Wells gets the character to talk to himself when he is in 'The Red Room', this shows how tense and apprehensive the character is in this frightening situation: ' "What's up?" I cried, with a queer high note getting into my voice somehow...My hands trembled so much that twice I missed the rough paper of the matchbox' It also shows how the Characters mind is preparing for the worst, this shows the fear inside which H.G. Wells comments on regularly. Towards the end, H.G. Wells gives a final blow to the story, as the Character has taken so much fright from his own imagination, he runs wild. No longer does he use his brain, he becomes an animal crashing about as he has lost all sense of direction. ...read more.

Wells and how the use of imagination breaks the use of being able to think clearly: 'I could not help wondering whether whoever had occupied Cedar room had died in it, perhaps even in this bed. I was, as you might say, almost expecting to have had bad dreams or see a ghost.' Later on Susan Hill changes the senses, from smells to sounds, this is because it is a night and she can not see much, so she is using her ears to paint the picture rather than her eyes or nose. In both stories everything happens at night, this suggests it could be the use of imagination, as the dark surroundings paints a picture of alarm. They both refer to death, so this is at their back of their mind ready to spring up. 'Farthing House' slowly builds up the tension whereas 'The Red Room' is like a lift slowly climbing up tens of floors then it shoots down the great height. A lot of people may have never seen a Ghost but the feeling is there, the fear and anxiety which brings it along adds to the tension of the moment. After reading this, Farthing house and The Red Room you may now be able to answer the first two questions in this essay. ?? ?? ?? ?? Nichola Hawkins ...read more.