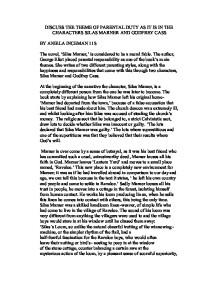 DISCUSS THE THEME OF PARENTAL DUTY AS IT IS IN THE CHARACTERS SILAS MARNER AND GODFREY CASS BY ANIELA INCEMAN 11S The novel, 'Silas Marner,' is considered to be a moral fable. The author, George Eliot placed parental responsibility as one of the book's main themes. She writes of two different parenting styles, along with the happiness and responsibilities that come with this through two characters, Silas Marner and Godfrey Cass. At the beginning of the narrative the character, Silas Marner, is a completely different person from the one he was later to become. The book starts by explaining how Silas Marner left his original home- 'Marner had departed from the town,' because of a false accusation that his best friend had made about him. The church deacon was extremely ill, and whilst looking after him Silas was accused of stealing the church's money. The religious sect that he belonged to, a strict Calvinistic sect, drew lots to decide whether Silas was innocent or guilty. 'The lots declared that Silas Marner was guilty.' The lots where superstitious and one of the supertitions was that they believed that their results where God's will. Marner is over come by a sense of betrayal, as it was his best friend who has committed such a cruel, untrustworthy deed, Marner looses all his faith in God. Marner leaves 'Lantern Yard' and moves to a small place named, 'Raveloe.' This new place is a completely new environment for Marner; it was as if he had travelled abroad in comparison to our day and age, we can tell this because in the text it states, ' he left his own country and people and came to settle in Ravaloe.' ...read more.

His relief was enormous. Afterwards, to show her his displeasure, Silas shut Eppie in the coal-cupboard for a few moments before taking her out. But after a while she herself went there thinking it was a game. From that day Silas was committed to bring Eppie up with love but not with punishment. Everyone�s experience of bringing up children gave them links with Silas. People liked the way of how she was growing and she became a popular child. She has given a new future to Silas and he was now a respected number of Raveloe society. The story moves forward sixteen years and Silas is seen leaving church on Sunday with Eppie. His rehabilitation and acceptance by the Raveloe community seems complete. During this time not only Silas but also the villagers had changed and Squire Cass was dead. Silas had been able to discuss with Dolly the false accusation against him in Lantern Yard. They agreed that it was a test of Christian faith which he had passed through taking such good care of Eppie. However, Silas�s life was once again being threatened when Godfrey Cass claimed his daughter back. But Eppie didn�t want to go back to Godfrey because she just recognised one father that was Silas. When Godfrey and Nancy return home they realise that Eppie will never be their daughter who preferred Silas�s good treatment to her real father�s wealth. Silas wanted to attend to what he now saw as the unfinished business at Lantern yard. He wanted to sort out things with the man who was minister at that time. When Silas went with Eppie back to the industrial town he was confused to see the changes there. ...read more.

She turned Marner ito a sincer, loving and caring man and rekindled his faith in God. Eppie decideds she will marry, to a local boy. Silas is happy because he gained a daughter and now a form of son. Eppie assures Silas that her a her new husband love each other and will stay together eternally, she says, ' I do not want change, I should like to go a long, long while just as we are.' This says that Eppie will not move away. On Godfrey's proposal to take Eppie back to be his and Nanceys daughter, it was not well planed. They thourght, ' surly the weaver would wish whats best for the child he had taken to much trouble with, and would be glad for such a fortune to come to her.' This was not the case because Silas and Eppie had strong bonds that where to special to be destroyed by finance and inanamte objects. This shows that Godfrey was too selfish and self centered to realize what a strong relationship Silas and Eppie had. ' it had never occurred to him that Silas would rather part his with life then with Eppie.' Godfrey finally suffers for all his years worth of mistakes, realizing that he cannot separate them, they have the same bond as all GOOD fathers have with their children, with deep compassion. The novel shows the need to love and feel compassion, with out it life appears to have no meaning. What we understand by the term 'Parental Duty,' is to support a child, not just financially but emotionally and to bring up the child in a kind and understanding manner, making sure that the child has respect for other people also, growing up to be a considerate and gracious person. ...read more.