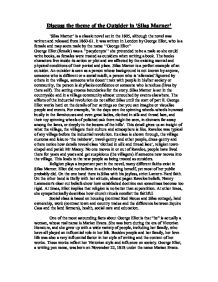 Discuss the theme of the Outsider in 'Silas Marner'.

Discuss the theme of the Outsider in 'Silas Marner' 'Silas Marner' is a classic novel set in the 1805, although the novel was written and released from 1860-61. It was written in London by George Eliot, who is a female and may seem male by the name ''George Eliot'' George Eliot (female) was a ''pseydonym'' she pretended to be a male so she could write books, as females were treated as outsiders when writing a book. The books characters live inside its action or plot and are affected by the existing mental and physical conditions of their period and place. Silas Marner is a perfect example of an outsider. An outsider is seen as a person whose background is not known by anyone, someone who is different or a social misfit, a person who is 'alienated'/ignored by others in the village, someone who doesn't mix with people in his/her society or community, the person is shy/lacks confidence or someone who is recluse (lives by there self). The setting creates boundaries for the story. Silas Marner is set in the countryside and in a village community almost untouched by events elsewhere. The effects of the Industrial revolution do not affect Silas until the start of part II. George Eliot works hard on the details of her settings so that you can imagine or visualise people and events. For example, 'in the days wen the spinning wheels-wheels hummed busily in the farmhouses and even great ladies, clothed in silk and thread lace, and their toy spinning wheels of polished oak there might be seen, in distracts far away among the lanes, or deeply in the bosom of the hills'. ...read more.

It gives an overview to bring us closer to the characters and events, it gives us a full picture of what's happening, gives us an insight of characters minds and dilemmas. These points make omniscient narrative very effective to use. Silas Marner is seen as an outsider. There are many things which make Silas an outsider, the main things, which portray Silas as an 'outsider' are, he lives away from the village of Raveloe, he lives in the isolated part of the town where no one else but him self lives (recluse), his background is no known by anyone in the village, he's shy and lacks confidence, he's alienated and ignored by villagers, he doesn't mix with the villagers or blend in with them, and he's a social misfit. He has a brief history that makes him an outsider in Raveloe, which changed his life. Back in Lantern yard where Silas used to live before moving to Raveloe, one night while he slept, his best friend into the room and taken away the deacons money bag then in a move to win the affections of Silas' sweetheart, he had blamed Silas the theft on Silas. The weaver was convicted, his faith shattered and his 'trust in a man...Cruelly bruised'. Silas had left his home in Lantern yard and now found himself a lone alienated prosperous village of Raveloe Silas's outsider status makes him the local point for the themes of community, religion, and family that Eliot unveils in the novel. ...read more.

Silas sees more happiness and joy with Eppie in his life than he ever had. Unlike the gold, which he admired and worshipped by himself, Eppie is full of love and warmth, and has such a warming affect on Silas that he becomes friendlier and kinder. Silas is able to express his affection for his adopted daughter and have his love returned to him, unlike the gold. The quote below suggests it, 'The gold had kept his thoughts in an ever-repeated circle, leading to nothing beyond itself; but Eppie was an object compacted of changes and hopes that forced his thoughts onward, and carried them far away from their old eager pacing towards the same blank limit - carried them away to the new things that would come with the coming years.' Silas takes Eppie with him wherever he goes. The villagers witness a change in Silas when he is with Eppie, and they, too, change their attitude about him. Smiles and cheerful inquiries now admire Silas. The elderly people of Raveloe admire Silas for rearing Eppie by himself as an older man. Even the kids who had been so scared of Silas before, now approach him happily; he is not the mean, scolding man h e once was when he is with Eppie. 'There was love between him and the child that blent them into one, and there was love between the child and the world'. Since Silas' life has evolved since the arrival of Eppie, this contrasts to earlier descriptions, 'to carry Eppie beyond the Stone-pits to where the flowers grew' before Eppie changed Silas' life, flowers unfolded instead of spider webs. ...read more.