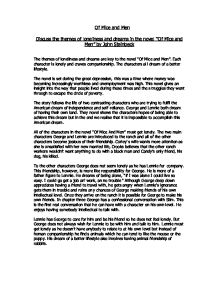 The themes of loneliness and dreams are key to the novel “Of Mice and Men”. Each character is lonely and craves companionship. The characters all dream of a better lifestyle.

The novel is set during the great depression, this was a time where money was becoming increasingly worthless and unemployment was high. This novel gives an insight into the way that people lived during these times and the struggles they went through to escape the circle of poverty.

The story follows the life of two contrasting characters who are trying to fulfil the American dream of independence and self-reliance. George and Lennie both dream of having their own land. They novel shows the characters hopes of being able to achieve this dream but in the end we realise that it is impossible to accomplish this American dream.

All of the characters in the novel “Of Mice And Men” must get lonely. The two main characters George and Lennie are introduced to the ranch and all of the other characters become jealous of their friendship. Curley’s wife wants more attention as she is unsatisfied with her new married life, Crooks believes that the other ranch workers wouldn’t want anything to do with a black man and Candy’s only friend, his dog, his killed.

To the other characters George does not seem lonely as he has Lennie for company. This friendship, however, is more like responsibility for George. He is more of a father figure to Lennie. He dreams of being alone, “if I was alone I could live so easy. I could go get a job an' work, an no trouble” Although George deep down appreciates having a friend to travel with, he gets angry when Lennie's ignorance gets them in trouble and ruins any chances of George making friends of his own intellectual level. Once they arrive on the ranch it is possible for George to make his own friends. In chapter three George has a confessional conversation with Slim. This is the first real conversation that he can have with a character on his own level. He enjoys having somebody intellectual to talk with.

Lennie has George to care for him and be his friend so he does not feel lonely. But George does not always wish for Lennie to be with him and talk to him. Lennie must get lonely as he doesn’t have anybody to relate to at his own level but instead of human companionship he finds animals which he can tend to like the mouse or the puppy. His dream of a better lifestyle also involves having animal friendship of rabbits.

The character of Candy is introduced in the second section. He is an old ranch hand who now cleans the buildings; he only has one hand as the other was lost in an accident. This disability isolates him from the other characters. His best friend is an old sheep dog, who like himself is unable to work and is thought to be useless. The death of Candy’s dog symbolises the harsh reality that once a person is unable to work they have no future on the ranch. Candy is always looking for friends but it is hard to make friends when all of the ranch workers keep moving on and find new work. All of the workers get caught in the trap of loneliness. They start of by continually moving from ranch to ranch so are never really there long enough to make friends. Once candy finally decides to stay at one plays it is the other workers who move away from him. This must make him lonely seeing everybody coming to the ranch and then leaving.

The character “Curley’s wife” is extremely lonely. I feel that she is the most lonely character of the novel, she is newly married to violent husband Curley as her name suggests. She has no name and is only referred to as the possession of her husband. This would make her feel more alone and unwanted. Her seclusion makes her become more flirtatious and she dresses in an unconventional manor for farm life to attract the attention of the other ranch hands. Curley does not give his wife to love and affection that she desires. This makes her seek it from other people. By not talking to anyone and constantly worrying about what Curley will do, she has attained a slyness that does not appeal to anyone on the ranch. Acting in flirtatious ways is the only way Curley's Wife thinks she can deal with her loneliness.

Curley is himself is lonely. His new wife hates him and so do all the other ranch workers. He married a women who isn’t suited for the type of life he leads. He does not give his wife the attention that she craves for so when she acts flirtatiously with the other workers he becomes very angry. This aggressive behaviour further isolates him from his wife and leads to the incident with Lennie where his hand is crushed. This shows us the power than Lennie and the other ranch hands have over Curley even though Curley is the boss’ son.

Crooks is another character who is isolated because he is different. He is the black stable buck and is ignored by virtually everybody at the ranch. He is bitter about this; "S'pose you couldn't go into the bunk house and play rummy 'cause you was black. How'd you like that? S'pose you had to sit out here an' read books. Sure you could play horseshoes til it got dark, but then you got to read books. Books ain't no good. A guy needs somebody - to be near him." When Lennie approaches him he is becomes hostile. He taunts Lennie about George not returning. When he does eventually allow himself to be drawn into the dream of working on George and Lennie's farm, he is immediately shut out by George's anger. Crooks feels "...A guys goes nuts if he ain't got nobody. Don't make no difference who the guy is, long's he with you...I tell ya... a guy gets too lonely an' he gets sick" He would work for nothing, as long as he could communicate with others.

All of the characters dream of a different life. Whether they share George and Lennie’s dreams of owning their own land or dream of becoming a movie star they all have hope of being able to make something better with their life. Candy and Crooks both wish to join the dream of owning some land and working for themselves. As well as this dream Crooks also wishes to be treated as an equal.

The characters are able to live with their loneliness by having a dream of friendship and companionship. All of the main characters in this novel dream for a real friendship like the friendship that George and Lennie exhibit. Candy tries to latch onto the plan of buying some land which George and Lennie so that he can also join their friendship. Crooks is also tempted by the idea of joining their dream when he believes that the dream may become a reality with the help of Candy’s money.

Crooks has a dream of being treated the same as the other ranch workers. Being the only black African-American worker on the ranch he is accustomed to racist comments and behaviour. However being set in the great depression it was extremely unlike that this dream would ever become a reality. He keeps a “copy of the California civil code for 1995” which is important to him because it sets out rights he has a negro. The only hope he had of getting away from the harshness of society was to become part of George and Lennie’s dream.

Curley’s wife believed that her dream was able to come true. She was given the opportunity to work in Hollywood, but in reality her dream never became true and she never got the opportunity to become a movie star. Her character could symbolise the fact that none of the dreams are going to become realities and in the end they will just fail. Her dream can now never be achieved because of her death and neither can the others characters as they dreams have been shattered by Lennie.

At the end of the novel, after Lennie has accidentally killed Curley's wife, they return to a setting which is the same as the opening scene. George and Lennie have completed a full circle - which is typical of the way these travelling men live. They are always arriving in new places having to make new friends and then having to move on to a new ranch. By doing this the workers are unable to achieve any live goals or dreams. Steinbeck uses this cyclical technique to reiterate the idea that the American dream is destined to fail and they will always be caught up in the cycle of ranch work and hard labour.

Overall I feel that the themes of loneliness and dreams play a key part to the novel “Of Mice and Men”. The characters all feel lonely and have dreams to live a better life and find friendship. As the story develops George, Lennie and Candy all feel closer to achieving their dream but once George and Candy found out what Lennie did to Curley’s wife the realised that the dream was always only going to be a dream. In the end where George is reciting the shared dream to Lennie for the last time it brings a conclusion to the vision of self sufficiency and happiness.