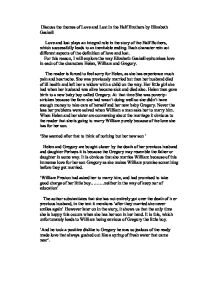 Discuss the themes of Love and Lost in the Half Brothers by Elizabeth Gaskell Love and lost plays an integral role in the story of the Half Bothers, which successfully leads to an inevitable ending. Each character rein act different aspects of the definition of love and lost. For this reason, I will explore the way Elizabeth Gaskell epitomises love in each of the characters Helen, William and Gregory. The reader is forced to feel sorry for Helen, as she has experience much pain and heartache. She was previously married but then her husband died of ill health and left her a widow with a child on the way. Her little girl she had when her husband was alive became sick and died also. Helen then gave birth to a new baby boy called Gregory. At that time She was poverty-stricken because the farm she had wasn't doing well so she didn't have enough money to take care of herself and her new baby Gregory. Never the less her problems were solved when William a man asks her to marry him. When Helen and her sister are conversing about the marriage it obvious to the reader that she is going to marry William purely because of the love she has for her son. ...read more.

This is revealed further when Helen dies and he ill-treats him because Helen had showed much affection for her son than for the marriage. ' My mother never got over his grudging dislike to his stepson' In the story William breaks all his promises, he made before he got married to Helen. William treated his son better than his stepson because his own son reminds him of Helen whom he loved, however, his stepson reminded him of the lack of love Helen showered on her own son by the previous marriage 'And at last I advised my father just to take him away, and set him to do some farm work' This shows that instead of giving him the education he needed and he had promise Gregory mother, he made him do farming work. Gregory doesn't help him self any further by acting immature. It gives William the admonition because aunty Fanny already thinks he is ' stupid and dull' and no wonder he had no one around who cared enough to guide him. The situation changes however, but by this time it is too late, Gregory risks his own life for his brother who did not care enough for him and who did not understand him. In this situation his is death is to be expected, similarly, like the mother who only got what she wanted priory to her died. ...read more.

Gregory's death was inevitable. It starts with his father and Sister dying. His mother marrying William not out of love and then his mother dying through childbirth. Gregory found peace when he was united with his brother. Already because of this death of Gregory Williams only recognises that Gregory was a kind person when it is far too late. He is feeling bad because it is a loss of a life and a messed up opportunity for a son and a stepfather relationship. Each character experiences there own type of love and lost. It is quite astounding how each of the characters ends up the same way alone, and death it seems is the only unifying force. In this story there is a special moral to it. It is saying love while you are alive and try to appreciate people for what they are, while they are alive. Helen experiences lost from when her daughter and husband die. William experiences lost when his wife neglected him for Gregory but what he did not realise is that Gregory needed more attention because he was a child, and she was trying to love them equally. He experience love from his son and from his stepson later on in the book when he dies. Gregory experiences lost from when his mother dies and the love he normally gets vanishes and also when he talks to his stepbrother. Written by L. Itam ...read more.