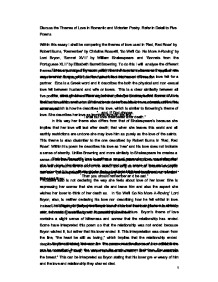 Discuss the Themes of Love in Romantic and Victorian

Discuss the Themes of Love in Romantic and Victorian Poetry. Refer in Detail to Five Poems Within this essay I shall be comparing the themes of love used in 'Red, Red Rose' by Robert Burns, 'Remember' by Christina Rossetti, 'So We'll Go No More A-Roving' by Lord Bryon, 'Sonnet XVIII' by William Shakespeare and 'Sonnets from the Portuguese XLIII' by Elizabeth Barrett Browning. To do this I will analyse the different themes of love portrayed by each poet, how the love is declared and explore the ways in which language is used and what effect this has on the reader. There are many differences within these five poems, however they all share one common theme, which is the type of love expressed- Eros; the love felt for a partner. Eros is a Greek word and it describes the both the physical and non-sexual love felt between husband and wife or lovers. This is a clear similarity between all five poems, although others have argued that perhaps Shakespeare's Sonnet XVIII is directed at someone who is not his wife since he describes her as unattractive in his other works. ...read more.

In 'So We'll Go No More A-Roving' Lord Bryon, also, is neither declaring his love nor describing how he felt whilst in love. Instead, he is trying to portray the emptiness and sorrow that losing love has left him with, thus striking a similarity with Rossetti's 'Remember'. Lord Bryon similarly describes a love that is lost however his love is already over, whereas Rossetti's poem is preparing for the future. Bryon's theme of love contains a slight sense of bitterness and sorrow that the relationship has ended. Some have interpreted this poem so that the relationship was not ended because Bryon wished it, but rather that his lover ended it. This interpretation was drawn from the line, "the heart be still as loving," which implies that the relationship ended despite Bryon still loving the woman. The second verse also seems to describe the love as 'outwearing' itself; "the sword outwears its sheath," and "the soul wears out the breast." This can be interpreted as Bryon stating that his lover grew weary of him and the love and relationship they shared died. ...read more.

The imagery implies that the love Bryon is describing as once being sharp and glittering like a sword, that it was passionate and came from the soul, that his heart was almost bursting with love and the love seemed eternal, which creates a powerful and moving image in the mind of the reader. To conclude, the themes of love are varied in many ways throughout the five poems and there are few similarities between all five. In '...A-Roving' and 'Remember' both Bryon's and Rossetti's themes differ from the rest in that they describe a love that has ended or will end soon, whereas Shakespeare and Burns declare their love lasting till the end of the world and Browning goes even further to state that her love will last and even improve after death. The amount of imagery used within the poems varies as well as the theme. Bryon, Shakespeare and Rossetti make little use of imagery which contrasts with the extravagant use of imagery win the poems by Browning and Burns. The way in which the imagery is used is another difference between the poems, for Browning, Burns, Bryon and Shakespeare use the imagery to compare and represent their love whereas Rossetti uses imagery to describe the "vestige of thoughts" she leaves behind. ?? ?? ?? ?? 1 ...read more.