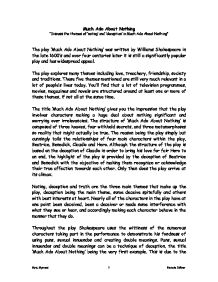 &quot;Discuss the themes of 'noting' and 'deception' in Much Ado About Nothing&quot;

Much Ado About Nothing "Discuss the themes of 'noting' and 'deception' in Much Ado About Nothing" The play 'Much Ado About Nothing' was written by Williams Shakespeare in the late 1600's and over four centuries later it is still a significantly popular play and has widespread appeal. The play explores many themes including love, treachery, friendship, society and traditions. These five themes mentioned are still very much relevant in a lot of people's lives today. You'll find that a lot of television programmes, movies, magazines and novels are structured around at least one or more of these themes, if not all at the same time. The title 'Much Ado About Nothing' gives you the impression that the play involves characters making a huge deal about nothing significant and worrying over irrelevancies. The structure of 'Much Ado About Nothing' is composed of three hoaxes, four withheld secrets, and three metamorphoses so reality that might actually be true. The reason being the play simply but cunningly tails the relationships of four main characters within the play, Beatrice, Benedick, Claudio and Hero. Although the structure of the play is based on the deception of Claudio in order to bring his love for fair Hero to an end, the highlight of the play is provided by the deception of Beatrice and Benedick with the objective of making them recognize or acknowledge their true affection towards each other. ...read more.

of her arrogance: "Nature never framed a woman's heart of prouder stuff than that of Beatrice" (Act 3 Scene 1 lines 49 - 50). "And therefore certainly it were not good she knew of his love, less she'll make sport at it" (Act 3 Scene 1 lines 57 - 58). When the women (Hero, Ursula and Margaret) manipulate Beatrice into believing that Benedick adores her, they conceal themselves in the orchard so that Beatrice can note their conversation and hopefully fall for their deceit. Hero is positive that Beatrice wouldn't mind eavesdropping, so they are sure that their plot will succeed: "There will she hide her. To listen to our purpose" (Act 3 Scene 1 lines 11 - 12) "look where Beatrice like a lapwing runs / Close by the ground to hear our conference", notes Hero (Act 3 Scene 1 lines 24 - 25). Each line the women speak is a carefully placed note for Beatrice to absorb and consider. Don John's plan to diminish Claudio's love for Hero and destroy their relationship relies on the idea of noting: if Claudio is to believe that Hero is unchaste and adulterous, he must be brought to her window to observe, or note, Margaret (whom he notes to be Hero) ...read more.

There are many instances in the play where the audience might have contemplated what if this had happened? Or what if this hadn't happened? For example what if Hero false death had had the same effect as Juliet's false death in 'Romeo and Juliet'. Claudio might have never forgiven himself, resulting in him taking his own life. 'Much Ado About Nothing' would have then been a tragedy rather than a comedy. Taken as a whole the play was indeed 'Much Ado About Nothing'. Nothing out of the ordinary would have happened, had there been no noting. Claudio would not have been noting Hero and consequently fallen for her "Benedick, didst thou note the daughter of Signor Leonato?" (Act 1 Scene 1 line 139). Subsequently Don John would not have been given the opportunity to sabotage their relationship and Claudio would not have noted whom he thought to be Hero bidding farewell to Borachio. The watchmen would not have noted the conversation between Borachio and Conrad and last but not least Beatrice and Benedick would not have noted the conversations although it was deliberate and fallen for each other and hence all else that stemmed from these two love affairs would not have happened. Total 1,587 words. 2 Mrs. Mynors Nancie Isibor ...read more.