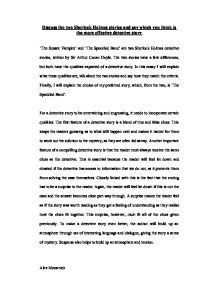 Discuss the two Sherlock Holmes stories and say which you think is the more effective detective story 'The Sussex Vampire' and 'The Speckled Band' are two Sherlock Holmes detective stories, written by Sir Arthur Conan Doyle. The two stories have a few differences, but both have the qualities expected of a detective story. In this essay I will explain what these qualities are, talk about the two stories and say how they match the criteria. Finally, I will explain the choice of my preferred story, which, from the two, is 'The Speckled Band'. For a detective story to be entertaining and engrossing, it needs to incorporate certain qualities. The first feature of a detective story is a blend of true and false clues. This keeps the readers guessing as to what will happen next and makes it harder for them to work out the solution to the mystery, as they are often led astray. Another important feature of a compelling detective story is that the reader must always receive the same clues as the detective. This is essential because the reader will feel let down and cheated if the detective has access to information that we do not, as it prevents them from solving the case themselves. ...read more.

This leaves no doubt in the reader's mind that that the woman has hurt her child and there appears to be no other explanation. Another example of a false clue is the mention of different cultures and the way the atmosphere helps create a certain impression. We find out that the woman is from Peru and is of a different 'alien' religion. This gives a feeling of the unknown and it seems that the woman is quite mysterious and different. Couple this with the fact that the atmosphere and description is built up to be quite eerie, the reader really suspects something supernatural. "An odour of age and decay pervaded the whole crumbling building." This is also an example of interesting use of language as it paints a very clear picture of an old frail building on the verge of falling down. This is often the kind of house associated with horror stories of vampires. The reader receives the same clues as the detective in the story, but the detective sometimes sees slightly more. For example, we understand that Holmes stares at the window with supreme concentration, but it is only he who sees the reflection of Jack with hatred on his face. ...read more.

This is a very effective description, because it builds up tension and makes the reader think that something exciting is about to happen. It also suggests that Roylott is a wicked man and it makes the reader suspicious of him. My main reason for preferring 'The Speckled Band' over 'The Sussex Vampire' is due to the fact that 'The Speckled Band' is longer, more in depth and builds up to more of a climatic finish. I like the way that the story builds up to the moment when Holmes and Watson are in the pitch black bedroom, when suddenly Holmes lashes out at the snake. I also think that the clues in 'The Speckled Band' fit together better, making the story complete. In addition, I think that 'The Sussex Vampire' was let down by the fact that in two cases, the detective saw more than the reader did. In my opinion, this turned the ending into something of an anti-climax and made me feel rather cheated. Nonetheless, I did enjoy the story, just not as much as 'The Speckled Band'. ?? ?? ?? ?? Alex Mccarrick ...read more.