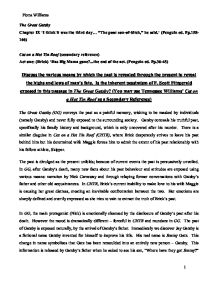 Discuss the various means by which the past is revealed through the present to reveal the highs and lows of man's fate - Is the inherent pessimism of F. Scott Fitzgerald exposed in this passage in The Great Gatsby?

The Great Gatsby Chapter IX 'I think it was the third day... "The poor son-of-bitch," he said.' (Penguin ed. Pp.158-166) Cat on a Hot Tin Roof (secondary reference) Act one: (Brick) 'Has Big Mama gone?...the end of the act. (Penguin ed. Pp.36-45) Discuss the various means by which the past is revealed through the present to reveal the highs and lows of man's fate. Is the inherent pessimism of F. Scott Fitzgerald exposed in this passage in The Great Gatsby? (You may use Tennessee Williams' Cat on a Hot Tin Roof as a Secondary Reference) The Great Gatsby (GG) conveys the past as a painful memory, wishing to be masked by individuals (namely Gatsby) and never fully exposed to the surrounding society. Gatsby conceals his truthful past, specifically his family history and background, which is only uncovered after his murder. There is a similar disguise in Cat on a Hot Tin Roof (CHTR), where Brick desperately strives to leave his past behind him but his determined wife Maggie forces him to admit the extent of his past relationship with his fellow athlete, Skipper. The past is divulged as the present unfolds; because of current events the past is persuasively unveiled. ...read more.

Firstly she tries reverse psychology, implying other men crave for her even if Brick does not: "They still see me, Brick, and they like what they see. Uh-huh. Some of them would give their -" (Act 1). When Brick's concentration wavers (indicated by distant whistling) Maggie shocks Brick back to reality by discussing Big Daddy's ill-health. This is successful as, "a realization of Big Daddy's doom seems to penetrate to Brick's consciousness" (Act 1). Maggie then begins a "liturgical chant" (Act 1), about Big Daddy's cancer and the prospect of Brick not inheriting part of the Poliett estate, which Brick seems uninterested in; this lack of anxiety could initially be interpreted as callously unconcerned for his father and his inheritance. Maggie has exhausted simplistic reasons for Brick not sleeping with her and is forced to delve into Brick's elusive past for an explanation. She obtains Brick's attention by the mention of Skipper indicated by Brick's his most emotional sentence to date, "Maggie, shut up about Skipper. I mean in, Maggie; you got to shut up about Skipper." (Act 1) Brick's short sentences directed at Maggie convey his desperation to avoid the topic. However, Maggie has finally got his attention she is forcing the past to be dragged out from under Brick not only for herself but also for Brick. ...read more.

The pessimism of F. Scott Fitzgerald and Tennessee Williams is prominent as the highs are out-numbered by the lows. Pessimism is introduced into CHTR in the difficulties of being homosexual in a society disgusted by it (Williams may be speaking from experience, as he was homosexual). Secondly, there is a very strong feeling of being trapped. Maggie loves Brick it is not reciprocated; Brick loves Skipper, who does reciprocate it but they cannot be happy together without disapproval and speculation. F. Scott Fitzgerald pessimism is mainly shown through Gatsby's life; he implies it is impossible to fulfil deepest dreams and desires. This leads to a second pessimism, the struggles endured by characters in their attempts to integrate into an established society. Through Nick, Fitzgerald suggests disgust at the morals followed by the rich society. He disagrees with their internal corruption, spurious friendliness towards outsiders without the 'correct name', and lastly, their blatant superficiality upon Gatsby's death. These extracts expose an inherent pessimism in both the works of Tennessee Williams and F Scott Fitzgerald. Their cynical opinions are introduced through the lows of the plots. Both indicate scepticism of the past and the characters' fate that Gatsby, Maggie and Brick will have to endure. Fiona Williams 1 ...read more.