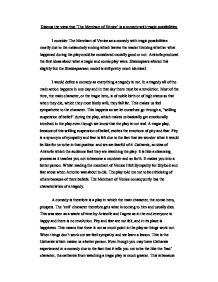 Discuss the view that 'The Merchant of Venice' is a comedy with tragic possibilities.

Discuss the view that 'The Merchant of Venice' is a comedy with tragic possibilities. I consider The Merchant of Venice as a comedy with tragic possibilities mostly due to the melancholy ending which leaves the reader thinking whether what happened during the play could be considered morally good or not. Aristotle produced the first ideas about what a tragic and comic play were. Shakespeare altered this slightly but the Shakespearean model is still pretty much identical. I would define a comedy as everything a tragedy is not. In a tragedy all of the main action happens in one day and in that day there must be a revolution. Most of the time, the main character, or the tragic hero, is of noble birth or of high status so that when they die, which they most likely will, they fall far. This makes us feel sympathetic to the character. This happens as we let ourselves go through a, "willing suspension of belief" during the play, which makes us basically get emotionally involved in the play even though we know that the play is not real. A tragic play, because of this willing suspension of belief, excites the emotions of pity and fear. Pity is a synonym of sympathy and fear is felt due to the fact that we wonder what it would be like for us to be in that position and we are fearful of it. Catharsis, an idea of Aristotle which the audience feel they are watching the play. It is like a cleansing process as it teaches you not to become a murderer and so forth. ...read more.

Shylock is a Jew and is therefore a minority in Venice. He is criticised for this and prejudices are formed against him about him being a bad man for being a Jew. He is put down by always being referred to as "the Jew" which would be very angering. During the play we feel mixed emotions towards Shylock. With the knowledge of what has happened to the Jews during the centuries we feel sympathetic to a greater extent towards him. However does he deserve this sympathy? Does he have the right to feel unhappy because he has been mistreated for being a Jew or is he really just a bad man who is deserving of these prejudices? When Antonio first meets Shylock we don't know whether or not to feel sympathetic towards him as he passionately speaks about how he is mistreated but he also backs up the reason for this treatment as he gives us a reason to believe he is tricking Antonio due to his incredibly kind jester of lending money to him without any interest at all, just the right to his flesh if he fails to pay him back in time. We are backed up about this view as Bassanio says that Shylock has a "villain's mind." When it comes to the court case, Shylock has had his daughter and his money taken away from him by a Christian, and his servant taken away from him by another Christian. He feels as if everyone he knows has turned on him and out of emotion he is desperate to kill Antonio by taking his flesh. ...read more.

Nerrisa is also unhappy with Gratiano as he has given the ring away, and Antonio, even though he is rich again, is lonely, still loves Bassanio and is jealous of Portia. Thus nobody in the end is really happy. The Jews are still put down by the Christians and the other characters are unhappy with each other and unhappy about what they have done to Shylock. What should have been a comedy has turned out to be a comedy with tragic possibilities. So in conclusion is the merchant of Venice a tragedy or a comedy? I would agree with the view that the merchant of Venice is a comedy with tragic possibilities. It depends on whether or not you think of Shylock as a comic villain or a tragic hero. I would see Shylock as a comic villain in the play as he hates the Christians and in the end tries to kill one. Then again there is more to this as Shylock's hateful emotions towards the Christians has been a result of immense prejudice against him. The Christians stole his servant, his daughter, and with her his money and pride. After the court case, and his harsh punishment we cannot help but feel sympathetic towards Shylock. Even the characters that had hated him throughout the play now feel guilt and sympathy. Most of which comes from Jessica, who has deserted her father, stolen his money and sided against him. Therefore we could see Shylock as a tragic hero in some respects. The main feel of the play however is a comic one even if there are blatant elements of a tragedy involved in the play. For that reason I will conclude by saying that The Merchant of Venice in my eyes is indeed a comedy with tragic possibilities. ...read more.