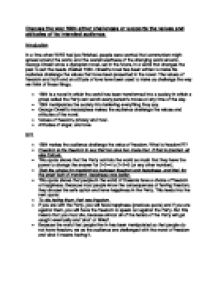 Discuss the way 1984 either challenges or supports the values and attitudes of its intended audience.

Discuss the way 1984 either challenges or supports the values and attitudes of its intended audience. Introduction In a time when WW2 had just finished, people were worried that communism might spread around the world, and the overall scariness of the changing world around, George Orwell wrote a dystopian novel, set in the future, in a world that changes the past to suit the needs ofcalled 1984. Orwell's novel has been written to make his audience challenge the values that have been presented in the novel. The values of freedom and truth and an attitude of love have been used to make us challenge the way we think of these things. * 1984 is a novel in which the world has been transformed into a society in which a group called the Party can watch every person's moves at any time of the day. * 1984 manipulates the society into believing everything they say. * George Orwell's masterpiece makes the audience challenge the values and attitudes of the novel. * Values of freedom, privacy and trust. * Attitudes of anger, and love. BP1 * 1984 makes the audience challenge the value of freedom. ...read more.

So the people who are against the Party are the sane ones. * If all records told the same tale - then the lie passed into history and became truth. * This is saying that if all of the novels in the world said the same things, this would become the truth. And if one thing was different from a book/magazine etc. then the Party would change it so it would become the truth. It is like saying if 10 books said that WW1 did not occur, and another book did, the Party would get that one book and change it so that it would say that WW1 did not occur. If everything in the world said that something happened, then the lie would pass into history and would become the truth. * Whatever the party holds to be truth, is truth. It is impossible to see reality except by looking through the eyes of the Party. * This is saying that everything the Party says is the truth and that everyone should listen to it. If you don't listen to the truth, then you can't see the reality of what the world is. ...read more.

That is the only way that people can betray someone. * Never again will you be capable of ordinary human feeling. Everything will be dead inside you. Never again will you be capable of love, or friendship, or joy of living, or laughter, or curiosity, or courage, or integrity. You will be hollow. We shall squeeze you empty and then we shall fill you with ourselves. * This quote is saying that the society of 1984 has no feeling for anything. Everyone is straight faced and just does what the Party want them to do. The line "Never again will you be capable of love" just says that the world can become a world has place of hatred for one another. This definitely challenges the audiences on love. * This novel has very little love in it and it makes us challenge what love actually is and why it is such a special thing for us as humans to have. CONCLUSION * These points that have been made so that the audience of 1984 challenges their values and attitudes. * The novel explores the values of truth and freedom and the attitude of love. * We see that after reading the novel how much we value these things in our world and that we should be grateful for what we have in life. ...read more.