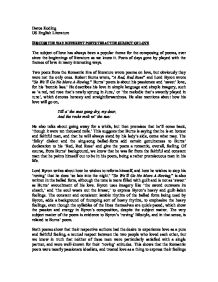 Discuss the way different poets treat the subject of love.

Daros Koding U6 English Literature DISCUSS THE WAY DIFFERENT POETS TREAT THE SUBJECT OF LOVE The subject of love has always been a popular theme for the composing of poems, ever since the beginnings of literature as we know it. Poets of days gone by played with the themes of love in many interesting ways. Two poets from the Romantic Era of literature wrote poems on love, but obviously they were not the only ones. Robert Burns wrote, "A Red, Red Rose" and Lord Byron wrote "So We'll Go No More A-Roving." Burns' poem is about his passionate and 'sweet' love, for his 'bonnie lass.' He describes his love in simple language and simple imagery, such as 'a red, red rose that's newly sprung in June,' or 'the melodie that's sweetly played in tune', which denotes honesty and straightforwardness. He also mentions about how his love will go on, Till a' the seas gang dry, my dear, And the rocks melt wi' the sun: He also talks about going away for a while, but then promises that he'll come back, 'though it were ten thousand mile.' ...read more.

Byron uses imagery like 'the sword outwears its sheath,' and 'the soul wears out the breast,' to express Byron's heavy and guilt-laden feelings. The constant and consistent iambic rhythm of the ballad form being used by Byron, adds a background of thumping sort of heavy rhythm, to emphasize the heavy feelings, even though the syllables of the lines themselves are quick-paced, which show the passion and energy in Byron's composition, despite the subject matter. The very subject matter of the poem is evidence to Byron's 'roving' lifestyle, and in that sense, is related to Burns' poem. Both poems show that their respective authors had the desire to experience love as a pure and faithful feeling, a mutual respect between the two people who loved each other, but we know in truth that neither of these men were particularly satisfied with a single partner, and were well-known for their 'roving' attitudes. ...read more.

She uses religious vocabulary such as faith, God, saints and grace, and these words, coupled with the abstract, also religiously-inclined oxymoronic images, give Browning's view, feelings on and treatment of the subject of love a more 'chaste' or more faithful and honest feeling and tone. Also, there is genuine grief in one of her lines, I love thee with a love I seemed to lose With my lost saints, These lines are a representation of Browning's feelings of loss when both her mother and sister passed away, so her lines are more heartfelt and 'real'. Also, the very fact that she is a woman composing these passionate lines adds credibility to her communicated emotion, although I don't mean to sound sexist by saying so. Browning treats love as something passionate, but also something that is to be respected and revered. The contrast between the different treatments and attitudes of and about love between the sexes and between the major periods in English literature is interesting, and many different viewpoints may be gained by studying these great authors. ...read more.