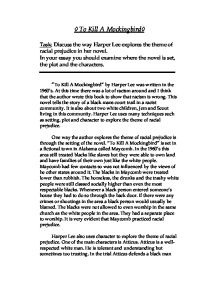 Discuss the way Harper Lee explores the theme of racial prejudice in her novel.

? To Kill A Mockingbird? Task: Discuss the way Harper Lee explores the theme of racial prejudice in her novel. In your essay you should examine where the novel is set, the plot and the characters. "To Kill A Mockingbird" by Harper Lee was written in the 1960's. At this time there was a lot of racism around and I think that the author wrote this book to show that racism is wrong. This novel tells the story of a black mans court trail in a racist community. It is also about two white children, Jem and Scout living in this community. Harper Lee uses many techniques such as setting, plot and character to explore the theme of racial prejudice. One way the author explores the theme of racial prejudice is through the setting of the novel. "To Kill A Mockingbird" is set in a fictional town in Alabama called Maycomb. ...read more.

Atticus is a well-respected white man. He is tolerant and understanding but sometimes too trusting. In the trial Atticus defends a black man called Tom Robinson. He also respects his black maids views and values her opinion. This shows he is not a racist as he treats the blacks as just as he treats the whites. He has two children, Jem and Scout who tries to teach that "its better to use your head than your fists". He also frequently tells them "you never really understand a person until you consider things from his point of view- until you climb into his skin and walk around in it". Atticus is presented as the type of character that we should look up to and respect his views. Most of the whites in the town are racist, especially the Ewells. One racist character is Aunt Alexandra. ...read more.

She treats everyone equally, black or white and is able to see from others points of view. She is also presented in a good light so the readers value her views on life and think that everyone should be equal. The author also tries to prove that people can change their racist ways by using character. She does this through the newspaper editor, Mr B.B. Underwood. At the beginning of the book he is very racist and will not even work near a black person. But towards the end he writes an article about Tom Robinson's death saying it was "a senseless slaughter of songbirds". All the black characters in this novel are presented in a good light. They all seem to be friendly, neat and hardworking. There is only one unwelcoming black character in the novel. The white characters such as Atticus and Miss Madie that are put in a good light all seem to be non-racist characters that treat everyone equally. I think this is how Harper Lee promotes the idea in which racism is wrong. ...read more.