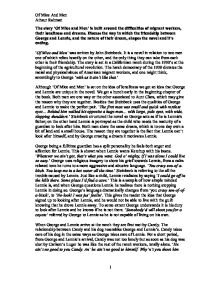 Discuss the way in which the freindship between George and Lennie and the nature of their dream, shapes the novel and it's ending in Of Mice and Men

The story 'Of Mice and Men' is built around the difficulties of migrant workers, their loneliness and dreams. Discuss the way in which the friendship between George and Lennie, and the nature of their dream, shapes the novel and it's ending. 'Of Mice and Men' was written by John Steinbeck. It is a novel in relation to two men one of which relies heavily on the other, and the only thing they can take from each other is their friendship. The story is set in a Californian ranch during the 1930's at the beginning of the agricultural revolution. The harsh democracy of the 1930 dictates the racial and physical abuse of American migrant workers, and one might think, accordingly to George 'with us it ain't like that.' Although 'Of Mice and Men' is set on the idea of loneliness we get an idea that George and Lennie are unique in the novel. We get a hunch early in the beginning chapter of the book. Both men are one way or the other associated to Aunt Clara, which may give the reason why they are together. Besides that Steinbeck uses the qualities of George and Lennie to make the perfect pair. 'The first man was small and quick with restless eyes... Behind him walked his opposite a huge man... with large, pale eyes, with wide, slopping shoulders.' Steinbeck structured the novel so George acts as if he is Lennie's father; on the other hand Lennie is portrayed as the child who needs the maturity of a guardian to look after him. Both men share the same dream, which is to one day own a bit of land and a small house. The reason they are together is the fact that Lennie can't look after himself, and by George creating a dream it motivates Lennie. George being a fulltime guardian has a split personality he feels both anger and affection for Lennie. ...read more.

From the arrival of Curley's wife the trouble starts and when Crooks stands up for himself he is sent one or two steps down. The atrocious language used by Curley's wife towards Crooks does not replicate Candy's response when he stands up to Curley's wife. Instead Candy's wife lets him off with ease by saying 'baloney...I know you guys,' however a colored man cannot speak to a white lady with disrespect. From 'baloney' Curley's wife language changes horrifically to 'listen, nigger...I could get you strung up on a tree so easy it ain't even funny.' For a moment Lennie and Candy managed to get Crooks interested, but the fact is 'A colored man got to have some rights even if he don't like 'em,' stated by Crooks. The moment Crooks came to sense, he realized there are people like Curleys wife who can ruin everything he wants in a split second. There was a nice moment in which Crooks was happy, the fact that him being black had nothing to do with it as he was able to be in a civilized conversation. Most readers may think Crooks was better off not knowing the dream then knowing a dream but not being able to get the dream. This is shown when he looked out of the door for a moment, 'a glance as the three men walked out of the door.' The disappointment brings back the suffering in Crooks life, as he goes back to rubbing the liniment on his back. The dream made Crooks into another person; he never used to desire friendship but when it came to him he left his guards down, and at the end he was back to where he was before. Lonely. In Of Mice and Men we know loneliness is affected in individuals mostly, but in some sense loneliness is also found within two sets of close people; prime example Curley and his wife. ...read more.

In both cases it gives the three men hope in their work and life's. As well as George and Lennie sharing the dream the dream centers the story it causes the problems, the misery for Crooks and most importantly the death of Curley's wife. George thinking that he can avoid problems whilst with Lennie was a big ask. Even if they did succeed and they got their dream, how long would it have been before Lennie gets himself in trouble again? They would not be able to run, because they own the house and the land. George killing Lennie must have been a tantrum rising and upsetting experience. The death of Lennie bought the death (end) of the dream, perhaps if George included someone like Slim In the dream maybe then he could have put in the money they needed; and there would have been no need of waiting. Steinbeck main target was to show that America is not always the land of opportunities, nor the land of democracy in the 1930's. People do not always get what they dream of, not having the facilities to kick of a dream was a problem shown with Curley and his wife. The educational version Of Mice and Men helped to structure the novel into six sections. Chapter one reflects on friendship and being able to go through life knowing someone is beside you gives you a great lift. Chapter two accouters the problem of trusting people around you, especially when people are new to you. 'Dream' was the central part of chapter three, and if it is achievable it is like a safety net; something for you to hold onto. 'Discrimination' and 'racism' was the headline bought up in chapter four during the 1930's depression of America. Chapter five brings up the idea of loneliness resulting into bad actions. Finally chapter six is about forgiveness and the staring a new slate. Overall the book is well structured and the idea of a 'dream' brings the novel together. ?? ?? ?? ?? Of Mice And Men Athaur Rahman 1 ...read more.