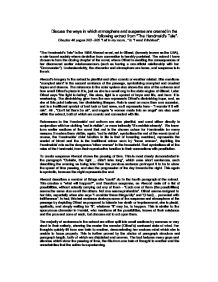 Discuss the ways in which atmosphere and suspense are created in the following extract from &amp;#147;The Handmaid&amp;#146;s Tale&amp;#148;.

Discuss the ways in which atmosphere and suspense are created in the following extract from "The Handmaid's Tale". Chapter 46 pages 303 -305 "I sit in my room..." to "I want it finished". "The Handmaid's Tale" is the 1986 Atwood novel, set in Gilead, (formerly known as the USA), a rule-bound society where deviation from convention is harshly punished. The extract I have chosen is from the closing chapter of the novel, where Offred is awaiting the consequences of her discovered earlier misdemeanours (such as having a non-official relationship with her "Commander"). Understandably, the character and atmosphere are tense, and suspense is in the air. Atwood's imagery in the extract is plentiful and often cosmic or weather related. She mentions "crumpled stars" in the second sentence of the passage, symbolising crumpled and crushed hopes and dreams. The reference to the solar system also shows the size of the universe and how small Offred's place in it is, just as she is a small cog in the state engine of Gilead. ...read more.

Red symbolises all of the roles of the Handmaid, from their reproductive function to their connections with prostitution. To create suspense Atwood shows the passing of time. This is most clearly demonstrated in the paragraph "Outside, the light ... didn't take long", which uses short sentences, each describing the evening as being later than the previous sentence portrayed it to be to show the speed of time passing, and also the progression of the day towards the night. This again is symbolic, because the night represents the end. Atwood describes a number of things she "could" do in the fourth paragraph of the extract. This creates a "what will happen?", and therefore suspense, as Atwood reels off a list of possibilities, without actually carrying out any of them - "Each one of them (the possibilities) seems the same size as all the others. Not one seems preferable". Offred seems resigned to her fate, especially when she says "I consider these things idly" and "(I feel) ... pervaded with indifference". In fact, this last sentence destroys some of the suspense and atmosphere of the passage by depicting Offred as prepared to tolerate her death or imprisonment, she is placid, apathetic, and simply waiting for "it", whatever "it" may be, to happen. ...read more.

This use of language makes it easy to imagine the narrator as a normal every day person who was catapulted into Gilead, rather than a journalistic view. Atwood successfully avoids the danger of sounding too descriptive and authoritative, not just during this passage but in the entire novel, giving the narrative a more realistic undertone and setting the book apart from most science fiction. This choice of language adds to the suspense of the passage because the feelings described are genuine, we know they are not just there for effect or drama. This effortless clear-cut and realistic dialogue runs throughout the entire novel, accentuating and validating the feelings and events described. The extract clearly has depressing and desolate undertones, with Offred's despair at its most prevailing at any point within the novel, as she is hopelessly resigned to her fate. The passage, however, avoids the trap of being dull and despondent, as would be easy to fall into at such a pessimistic point in the novel. Atwood's imagery, sentence structure and language, bring the passage to life and prevent it from being gloomy and grey, instead creating an atmosphere of suspense. ...read more.