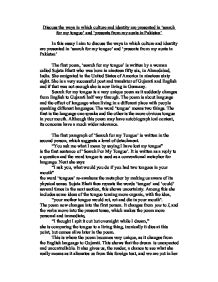 This poem has a strong autobiographical content and there are some specific personal references in it. It is constructed on the thoughts of a teenage girl who is trapped between two cultures The first two paragraphs refer strongly to the idea of the difference of fashion between the two cultures and basically a teenage girl has been given some clothes as presents from her aunts in Pakistan. The first paragraph contains many descriptive words, including onomatopoeias, "glistening" "snapped" and also similes, "like an orange split open," colours, shapes and comparisons with fruit are used as well. For most teenagers clothes are a sign of identity but her identity seems to be lost due to her mixture of culture in Pakistan and England, "like at school, fashions changed in Pakistan the salwar bottoms were broad and stiff the narrow." The next paragraph shows how she is uncomfortable wearing her Pakistani clothes in England, but also how she admires them but doesn't feel she belongs to them. "I tried each satin-silken top - was alien in the sitting-room. I could never be as lovely as those clothes" She feels that she is alienated from both cultures. Now the poet tells us how, although she feels western clothes are dull and dreary, they do not make her stand out from the crowd. ...read more.

"Or there were beggars, sweeper-girls and I was there - of no fixed nationality, staring through fret work at the Shalimar Gardens." She feels neither English nor Pakistani 'of no fixed nationality'. This is a series of comments, reflections and memories rather than a sequence or argument. The poem is written in free verse as to represent her struggle to define her cultures and to find out who she is. It is shown in altering line length. The poem draws us into it as if we were the ones who do not know who we really are or where we really belong. It ends without a clear view. She is still an outsider looking in and never being a part of it. Both of these poems discuss the struggle of being part of two cultures and both poets have had to deal with this in there own life, so they are both autobiographical poems. 'Search for my Tongue' starts off very negative, but as the poem goes on it becomes more positive, like a seed emerging into a flower. 'Presents from my Aunts in Pakistan' starts off more positively but as it goes on it gets quite glum and negative. My personal view of these poems is that they are both very fascinating in a very dull, boring way. It made me think closer about the struggle people deal with everyday over changing cultures. My favourite poem was 'Search for my Tongue, as it was shorter and easier to digest. ...read more.