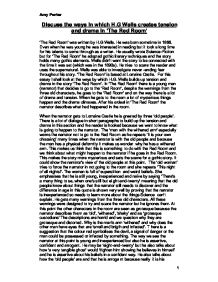 Discuss the ways in which H.G Wells creates tension and drama in The Red Room

Discuss the ways in which H.G Wells creates tension and drama in 'The Red Room' 'The Red Room' was written by H.G Wells. He was born sometime in 1866. Even when he was young he was interested in reading but it took a long time for his talents to come through as a writer. He usually wrote Science-Fiction but for 'The Red Room' he adopted gothic literary techniques and the story holds many gothic elements. Wells didn't want the story to be connected with the time it was set (which was in the 1890s). He tries to scare the reader and uses the supernatural. Wells was able to investigate never-ending fear throughout his story. 'The Red Room' is based at Lorraine Castle. For this essay I shall look at the ways by which H.G. Wells builds up tension and drama in the story 'The Red Room'. In 'The Red Room' there is a young man (narrator) that decides to go to the 'Red Room', despite the warnings from the three old characters, he goes to the 'Red Room' and on the way there is a lot of drama and tension. When he gets to the room a lot of mysterious things happen and the drama climaxes. After his ordeal in 'The Red Room' the narrator describes what had happened in the room. When the narrator gets to Lorraine Castle he is greeted by three 'old people'. There is a lot of dialogue in short paragraphs to build up the tension and drama in this section and the reader is hooked because we want to know what is going to happen to the narrator. The 'man with the withered arm' especially warns the narrator not to go to the Red Room as he repeats 'It is your own choosing' many times when the narrator is with the old people and because the man has a physical deformity it makes us wonder why he has a withered arm. ...read more.

His original belief that nothing was in the room goes totally out the window when the darkness started to encircle him to submission, 'the shadows seemed to take another step towards me' showing personification of the shadows as we know this can't happen in real life and fear setting in, after this the belief that no fear could attack him comes true and the panic sinks in. He also has a firm scientific view as he thought 'nothing supernatural could happen' this shows that he thinks nothing will happen to him and it also builds up tension because of the way he puts forward his ideas, it has a sense of sarcasm in the saying as well' He is very sarcastic about the matter it 'occurred to me that when the ghost came, I could warn him not to trip over them' (candles) so this proves that he believes nothing whatsoever could happen to him and we know it is something to do with the shadows and darkness because they are repeated from the last section to this one. He suggests that the tales are nonsense as he puts forward the 'fanciful suggestions' showing superstition against Science again and builds up the tension in the room. Another way the tension builds is the use of 'the great red room of Lorraine Castle' meaning that it is already famous. No one dares enter but 'the young duke had died' there and had tried to 'conquer the ghostly tradition of the place' meaning that he was brave or 'gallant' to try to beat the room showing that now the narrator had to adopt the big task that he knows he has to do and an end to the superstition of the room but we wonder if the narrator will die like the young duke because he has been brave too to do such a thing. He thought of older stories where the superstition began with 'the tale of a timid wife and the tragic end that ...read more.

He uses personification to prove his point as 'it creeps', 'follows you' and makes 'you dare not turn' showing you always have to battle with fear. Then he refers to it as 'black fear' so proving that black has bad connotations. The last phrase of the story is 'as this house of sin endures' which has an element of mystery and suspense so we wonder what other things the house holds. The techniques used show many elements of suspense and anticipation. Examples of this are things such as imagery, personification and darkness descriptions so these techniques makes it more suspenseful at the end of the story. To conclude, in my opinion I think that this story is very good at looking at the ageless thing, fear, and the tension and drama that is shown throughout the story shows the way fear plays with your mind. It is almost like it is a game of war that works against you all your life. I think that the narrator changed for the better meaning that now he can have a scientific view but with the common moral that fear lives within everyone. I think that the man with the shade was the most wise because he knew what was truly in the room and that if you entered then fear would take over. H G Wells has used the suspense very well in the story and uses many different techniques to back this up, the most common technique was personification because he wanted to show how the darkness and fear is real for everyone. The suspense is used to create speculation for the reader so they understand what fear can do. So, finally, the Red Room uses many different ways to create suspense, tension and drama. Most of this tension and drama is released in the third section and we can see how it affects the way the narrator acts. So, I believe that the 'Red Room' used the right techniques to show how tension and drama reached its climax. ?? ?? ?? ?? Amy Porter 1 ...read more.