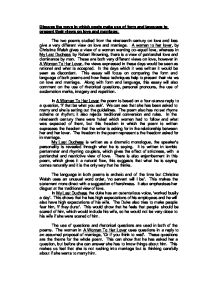 Discuss the ways in which poets make use of form and language to present their views on love and marriage.

Discuss the ways in which poets make use of form and language to present their views on love and marriage: The two poems studied from the nineteenth century on love and loss give a very different view on love and marriage. A woman to her lover, by Christina Walsh gives a view of a woman wanting co-equal love, whereas in My Last Duchess by Robert Browning, there is a view of patriarchal love and dominance by man. These are both very different views on love, however in A Woman To Her Lover, the views expressed in these days would be seen as rational and what is accepted. In the days which it was written it would be seen as discordant. This essay will focus on comparing the form and language of both poems and how these techniques help to present their views on love and marriage. Along with form and language, this essay will also comment on the use of rhetorical questions, personal pronouns, the use of exclamation marks, imagery and repetition. In A Woman To Her Lover the poem is based on a four-stanza reply to a question, 'If that be what you ask'. We can see that she has been asked to marry and she is setting out the guidelines. ...read more.

These questions are the theme for the whole poem. This can show that he has asked her a question, but before she can answer she has to know things about him. This makes us feel that she is not rushing into marriage but is thinking carefully about if she wants to marry him. The duke, on the other hand, answers his own question, 'who'd stoop to blame'. He wants the envoy to agree with his anger and disgust at his disobedient wife. He expects 'correct' answers and is single minded about other views. Along with this he always expects people to agree with him. He would not expect his wife to have her own views, even her view of if she wanted to marry him. Cristina Walsh uses the words 'we', 'you' and 'I' a lot in her poem, A Woman To Her Lover. This shows that the woman wants co-equal love as she involves the man in the poem. She says what 'we' want rather than 'I' want. It shows partnership in the relationship and togetherness. My Last Duchess has a lot of the personal pronoun, 'I'. This shows that he sees love as ownership and will see his wife as a possession rather than a partner. ...read more.

This repetition makes us think that he is obsesses with the 'bad behaviour' of his wife and cannot let simple things drop. This makes us think that he is strict with his wife and is not caring or forgiving. These two poems both give very different views of love and marriage in the nineteenth century. Christina Walsh gives a modern view of a relationship, which is what most couples try for today. She lists the conditions for her love. These conditions however are not biased but things that will balance the relationship. Whereas in Robert Browning's, My Last Duchess the Duke talks about a relationship where he has complete dominance over his wife. He also expects her to look up to him at all times and be thankful of everything he has and for her to not acknowledge any other men. Robert Browning's patriarchal view of love, which he talks about in My Last Duchess, was seen as acceptable in the nineteenth century, especially by men. Women yearned for the view of Christina Walsh, but nothing was done about it, we can now see that this view is now a reality in today's world and any other view, i.e. Robert Browning's view, would be unacceptable. ...read more.