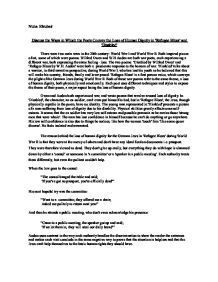 Nuha Elzubeir Discuss the Ways in Which the Poets Convey the Loss of Human Dignity in 'Refugee Blues' and 'Disabled' There were two main wars in the 20th century: World War I and World War II. Both inspired pieces of art, some of which were poems. Wilfred Owen and W.H Auden are both war poets, each experiencing a different war, both expressing the same feeling - loss. The two poems: 'Disabled by Wilfred Owen' and 'Refugee Blues by W.H. Auden' were both a passionate response to the horrors of war. 'Disabled' talks about a warrior, in third narrative perspective, during World War I, who has lost his youth as he believed that this will make his country, friends, family and lover proud. 'Refugee Blues' is a first person voice, which conveys the plight of the German Jews during World War II. Both of these war poems refer to the same theme, a loss of human dignity, both physically and emotionally. Each poet uses different techniques and styles to expose the theme of their poem, a major aspect being the loss of human dignity. Owen and Auden both experienced war, and wrote poems that revolve around loss of dignity. In 'Disabled', the character, an ex-soldier, can't even put himself to bed, but in 'Refugee Blues', the Jews, though physically capable in the poem, have no identity. The young man represented in 'Disabled' presents a picture of a man suffering from loss of dignity due to his disability. ...read more.

He didn't have to beg; Smiling they wrote his lie; aged nineteen years," The fact that he lied to make someone let him 'throw away his legs' and his youth makes me feel very sympathetic for the soldiers in battle. Owen wants to show the world that war brings nothing but misery and pain to us and that we should refrain from using violence. He is promoting peace using his own 'weapon' - poetry. Owen and Auden display different emotions using different perspectives. In 'Disabled', the sense of immense isolation is strongly present because of third narrative perspective. He portrays a lonely man, "waiting for dark". His life is so boring so he has a lot of free time feeling sorry for himself and pitying the helpless man he has become. His life has been planned for him without another option: "Now, he will spend a few sick year in institutes And do whatever the rules consider wise" War and fighting have left him helpless, alone and dependent upon others. If the poem was written in first person then the reader would be able to relate to the character more and therefore the sense of isolation and loneliness would die away leaving the poem without one of its strongest points. The poet makes the character seem forgotten and taken for granted: "How cold and late it is! Why don't they come And put him into bed? ...read more.

In 'Disabled' colours set the mood and atmosphere and the image of a man alone in the dark is very powerful: "He sat in a wheeled chair, waiting for dark, And shivered in his ghastly suit of gray" He also created an image of his beautiful youth which he enjoyed a lot more than he gave it credit: " When glow-lamps budded in the light blue trees And girls glanced lovelier as the air grew dim" His life went from being light to dark, and Wilfred Owen's abilities to illustrate and colour a painting with words are magnificent. He shows us that even when it was dark, his life was one of a happy young man, but now his life is as dark as can be and there's nothing he can do about it. Is war a good or bad thing? In the eyes of the majority of human kind, war has been nothing but a bad fingerprint in the hands of humanity. Mankind has learnt about the horrors and consequences of war, yet it still continues to happen. War is merely the massacring of one's sibling, and it leaves a soldier in a nightmarish state of mind. What griefs me most is that there are civil wars all over the world. We all know war causes economic disasters, displaces people, makes thousands of children orphans, makes thousands of women widows and kills thousands more men in the battlefield, so why do we still continue to fight and kill? Will humans ever learn to create harmony with each person's differences or will advanced technology encourage violence furthermore? ...read more.

4 stars ****
This is an excellent essay in many ways. It is beautifully written and the writer understands the poets' messages.
Well selected quotes support statements.
Mature and reflective analysis culminates in a powerful conclusion which should include summary of essay's content.
Good social and historical context.
Language analysis is accurate and insightful but more language analysis needed throughout the essay.