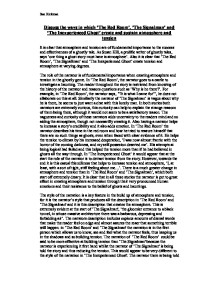 Discuss the ways in which 'The Red Room', 'The Signalman' and 'The Inexperienced Ghost' create and sustain atmosphere and tension

Discuss the ways in which 'The Red Room', 'The Signalman' and 'The Inexperienced Ghost' create and sustain atmosphere and tension It is clear that atmosphere and tension are of fundamental importance to the success and effectiveness of a ghostly tale. As Susan Hill, a prolific writer of ghostly tales, says 'one thing a ghost story must have is atmosphere'. Also it is clear that 'The Red Room', 'The Signallman' and 'The Inexperienced Ghost' create tension and atmosphere at varying degrees. The role of the narrator is of fundamental importance when creating atmosphere and tension in the ghostly genre. In 'The Red Room', the narrator goes to a castle to investigate a haunting. The reader throughout the story is restricted from knowing of the history of the narrator and reasons questions such as 'Why is he there?'. For example, in 'The Red Room', the narrator says, '"It is what I came for"', he does not ellaborate on this at all. Similiarly the narrator of 'The Signalman' is vague about why he is there, he seems to just want a chat with this lonely man. In both stories both narrators are extremely curious, this curiosity can help to explain the strange reasons of them being there, although it would not seem to be a satisfactory reason. The vagueness and curiosity of these narrators adds uncertainty to the readers mind and so aiding the atmosphere, though not necesarilly creating it. ...read more.

It is extremely evident in 'The Red Room' and 'The Signalman' and it is this that really makes them 'scary'. In 'The Red Room' there is classic ghost story description, flickering candles, oppressed shadows, strange house, moonlit corridors and subterranean passages. These all amount to the building of tension and of atmosphere in the house as they put you on edge because you know something weird and supernatural will happen. In comparison, 'The Signalman' includes a lot of this gloomy description and also includes the isolated setting of 'The Red Room', 'his post was in as solitary and dismal place as ever I saw'. An interesting similiarity is the subterranean setting of 'The Signalman', 'the cutting was extremely deep', and the sub-terranean passages of 'The Red Room', 'the long, draughty subterranean passage was chilly and dusty'. By using words like gloomy and chilly the atmosphere becomes foreboding and the tension builds and builds as the reader does not know what will happen yet. In 'The Red Room' shadows are personified, this makes them even scarier, when they could just be described as ordinary shadows but instead re made to appear human and sppoky, 'made the shadows cower and quiver', 'a shadow came sweeping up after me, and one fled before me into the darkness overhead'. It is clear that setting is of importance to atmosphere and tension because it is the base that these feelings are built on. ...read more.

In 'The Signalman' you hear most of the facts of the story through dialogue, from the signalman. Some of the signalmans' first words were, '"I was doubtful," he returned, "whether I had seen you before"' this immediately changes the mood, what a strange thing to say to anyone. It increases the atmosphere by making the reader uncomfortable. Similarly in 'The Red Room' the conversation at the beginning clearly made the narrator uncomfortable and so the reader feels uncomfortable and nervous also. When the narrator was in the red room his frantic speaking increased the dialogue by showing how scared he was, '"What's up?" I cried, with a queer high note getting into my voice'. Dialogue can seriously add atmosphere, it is the only input a secondary character gets other than their description and so is likely to show a lot about them. In conclusion it is clear that between 'The Signalman' and 'The Red Room' tension and atmosphere are created similarly, though this is not the case of 'The Inexperienced Ghost' even though it does create atmosphere and tension. I conclude that the best creator of atmosphere and tension is the setting, as it is this detail that bulks a story out and is the background to all the added on intricasies of dialogue, the narrator and the primary and secondary characters. ?? ?? ?? ?? Ben Hickman ...read more.