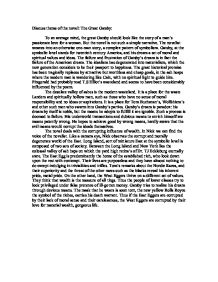 Discuss theme of the novel: The Great Gatsby.

Discuss theme of the novel: The Great Gatsby: To an average mind, the great Gatsby should look like the story of a man's passionate love for a woman. But the novel is not such a simple narrative. The novelist weaves into an otherwise one-man story, a complex pattern of symbolism. Gatsby, at the symbolic level stands for twentieth century America, and his dream a set of moral and spiritual values and ideas. The failure and frustration of Gatsby's dream is in fact the failure of the American dream. The idealism has degenerated into materialism, which the new generation considers to be their passport to happiness. ...read more.

It is a place for Tom Buchanan's, Wolfshiem's and other such men who swarm into Gatsby's parties. Gatsby's dream is paradox: his dream by itself is noble, but the means he adopts to fulfill it are ignoble. Such a process is doomed to failure. His underworld transactions and dubious means to enrich himself are means patently wrong. He hopes to achieve good by wrong means, hardly aware that the evil means would corrupt the ideals themselves. The novel deals with the corrupting influence of wealth. In Nick we can find the voice of the novelist. Like a camera eye, Nick observes the corrupt and morally degenerate world of the East. ...read more.

Tom's remarks about the Nordic Races, and their superiority and the threat of the other races such as the blacks reveal his inherent pride, racial pride. On the other hand, the West Eggers thrive on a different set of values. They think that wealth is the measure of all tings. Thus the people of lower classes try to look privileged under false pretence of ill-gotten money. Gatsby tries to realize his dream through devious means. The mask that he wears is soon torn, the new yellow Rolls Royce the symbol of the riches, carries his death warrant. Thus if the East Eggers are corrupted by their lack of moral sense and their carelessness, the West Eggers are corrupted by their love for material wealth, gorgeous life. ...read more.

This answer is very well focused in answering a challenging question on the themes of F. Scott Fitzgerald's 'The Great Gatsby'. Because the question is so broad, there is a danger that an answer as small as what is given ...

This answer is very well focused in answering a challenging question on the themes of F. Scott Fitzgerald's 'The Great Gatsby'. Because the question is so broad, there is a danger that an answer as small as what is given will not sufficiently cover all the aspects and the themes explored in the novel. However, this candidate's answer is so well-focused; is so precise in their word choice and demonstration of a profound understanding of the novel, that there are very little analysis here that does not elicit marks. The candidate demonstrates an extremely developed understanding of not just how to analyse 'The Great Gatsby', but there is in fact evidence to suggest that this candidate possesses abilities to analyse any novel (links to 'East of Eden'/Cain and Abel, and T.S. Elliot's poem 'Wasteland'). As a result, this answer can only achieve top marks as it is such an excellently written response.

The candidate comments on the themes presented in the novel at a very profound depth. There is evidence that this candidate can correctly identify the themes and how Fitzgerald has taken The American Dream and adapted it to fictionalise the empty, aimless existences of people like Tom and Daisy Buchanan. They also do well to recognise the fundamental process by which the novel operates - it is not simply the story of one man chasing his dream, but it is the vehicle by which Fitzgerald presents the enchanting opulence of 1920's America, and at the pivotal moment where readers feel most aligned with the shimmering champagne flutes and flamboyant brass bands, he shatters it before their very eyes. This has been recognised by the candidate, which shows an excellent understanding of the novel and it's themes. It is quite surprising to find such a high level of analysis in such a short answer, but examiners love candidate who write well concisely.
One think I would perhaps like to see more of though are direct quotes from Fitzgerald's text. The candidate references the text frequently, but their analysis would be strengthened if they proved their points were actually quoted from Fitzgerald's narrative.

The Quality of Written Communication is good. There are are few minor inconsistencies with what is expected of candidates for GCSE (such as the non-capitalisation of published works like "T.S. Elliot's wasteland (sic)", which should be written thus - "'Wasteland'", with inverted commas because that is what is expected. Other than that, there is very little to comment on as the candidate uses a diverse selection of vocabulary to create their answer and spells each words correctly.