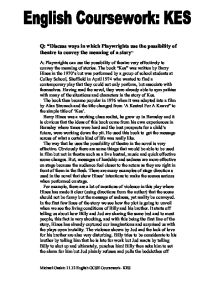 Q: "Discuss ways in which Playwrights use the possibility of theatre to convey the meaning of a story" A: Playwrights can use the possibility of theatre very effectively to convey the meaning of stories. The book "Kes" was written by Barry Hines in the 1970's but was performed by a group of school students at Colley School, Sheffield in April 1974 who wanted to find a contemporary play that they could not only perform, but associate with themselves. Having read the novel, they were already able to sympathise with many of the situations and characters in the story of Kes. The book then became popular in 1976 when it was adapted into a film by Alan Stronach and the title changed from 'A Kestrel For A Knave" to the simple title of 'Kes'. Barry Hines was a working class realist, he grew up in Barnsley and it is obvious that the ideas of this book come from his own experiences in Barnsley where times were hard and the best prospects for a child's future, were working down the pit. He used this book to get the message across of what a certain kind of life was really like. ...read more.

People don't usually expect to hear such foul language at the theatre especially off young children. So, this ultimately leads to more shocking feelings by the audience, which we know, were Hines' goal. The language used by Macdowall's mom when Billy calls for him to go bird watching is also very horrific. Billy's own mother, toward him and Jud, uses more bad language and this is quite unbelievable as this is the one person you expect to set an example to Billy. The amount of people who are rude to Billy is quite vast. There doesn't seem a place for Billy to turn to where he can be treated equally and fairly. Not even his own mother, the one person you expect Billy to be able to turn to in a time of need, helps him. When Billy has discovered that Jud has killed the bird, he tries to hug his mother for affection. But, she pushes him away. Hines made it clear in his directions that when this part is to be performed, it is meant to be one of the most shocking parts of the play. Everyone is rude to Billy: Jud, Mr. Porter, his mother, Mrs. Macdowall, the Farmer, The Librarian, Mr. Gryce, Mr. Crossly, Anderson, Mr.Sugden and the Youth Employment Officer. ...read more.

Hines uses his theatre directions clearly by making sure it is not portrayed in a comic way, but in a more shocking and disturbing manor. With all these factors considered, it shows Billy as defenceless and vulnerable but, Billy, in his own little ways, manages to get revenge against the people who are so horrible to him. For example, when Billy is speaking to Mr. Porter about doing his papers, Mr. Porter puts Billy down with some insulting comments. At this time, Mr. Porter is standing on a ladder and Billy shakes the ladder but makes it out as an accident. For the audience this is funny but we are also glad that Billy is getting some sort of revenge and not always getting downtrodden all the time. When Jud returns from his night out and is drunk, Billy starts shouting, "Pig-Hog-Sow-Drunken-Bastard" at the top of his voice and then punches Jud. In some ways this is funny but we can see that Billy is a bit disturbed. Finally, using theatre to convey the meaning of story is a very effective medium. But, there are some instances where it would be better to use film. However, with film, you don't get the close relationships and the powerful feeling of understanding that you would do in a theatre. Michael Gaskin 11.12 English GCSE Coursework- KES ...read more.