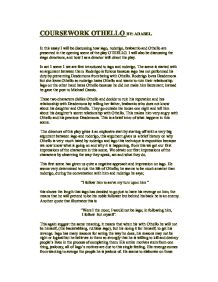 Discussing how iago, roderigo, brabantio and Othello are presented in the opening scene of the play Othello.

COURSEWORK OTHELLO BY: ADABEL. In this essay I will be discussing how iago, roderigo, brabantio and Othello are presented in the opening scene of the play OTHELLO. I will also be discussing the stage directions, and how I as a director will direct the play. In act 1 scene 1 we are first introduced to iago and roderigo. The scene is started with an argument between them. Roderigo is furious because iago has not performed his duty by preventing Desdemona from being with Othello. Roderigo loves Desdemona but she loves Othello so roderigo hates Othello and wants to ruin their relationship. Iago on the other hand hates Othello because he did not make him lieutenant; instead he gave the post to Michael Cassio. These two characters dislike Othello and decide to ruin his reputation and hes relationship with Desdemona by telling her father, brabantio who does not know about his daughter and Othello. They go outside his house one night and tell him about his daughter's secret relationship with Othello. This makes him very angry with Othello and his precious Desdemona. This is a brief intro of what happens in this scene. ...read more.

We get the impression that Roderigo not only hates Othello but probably wants him dead when he says; "By heaven, I rather would have been his hangman" Now we get the impression that although roderigo is more anxious and hateful toward Macbeth than Iago, he is also malcontent, his not satisfied with what he has and wants more by ruining Othello. ADABEL OKI In this scene, we also see that Roderigo's level of hatred just doesn't stop there, he and Iago set of to get Brabantio, Desdemona's father to hate Othello also by telling him his daughter is with Othello and also describing to Brabantio using very negative and racist comments, giving him a bad impression of Othello, "lascivious moor" this is a bad comment made by Roderigo to give Brabantio a bad impression on Othello. Brabantio, last character we meet in this scene he is portrayed as a very irritable and authoritative old man. when he was woken by Iago and Roderigo, to inform him about his daughter, he got annoyed and said "what is the reason for this terrible summons?" this shows that he is indeed an irritable man, and also he did not believe what they said about his daughter and Othello, and called ...read more.

The character playing Brabantio must have a very loud and royal voice to show that he is authoritative and when he says "What is the reason of this terrible summons?" He should shout a little bit to show he's very irritable. For sound effects, I will use sounds of owls and crickets to show that its night when roderigo and iago start arguing and plotting against Othello, I will use sounds of wind to show the presence of evil. As we go deep into the scenes, I will use tensed music to create tension and other dramatic music to suit the mood and atmosphere. For the settings of act I scene 1 , I will put iago and roderigo behind a castle ( brabantio house), they will be standing behind a tree to show that the are having a secret meeting. When Brabantio is summoned, I will have him stand at a window looking down at roderigo but not iago as he is still hiding behind the tree. I will use appropriate costumes for the characters depending on what version of the film is being made. If its an old version, they will wear clothes worn in those days, but if it's a modern version, I will direct them to wear dark coloured clothes. ADABEL OKI ...read more.