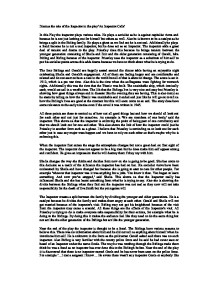 Discussthe role of the Inspector in the play 'An Inspector Calls'

Discuss the role of the Inspector in the play 'An Inspector Calls' In this Play the inspector plays various roles. He plays a socialist as he is against capitalist views and because he is not just looking out for himself but others as well. Also he is known to be a catalyst as he brings a split in the Birling family. He plays a ghost as we find out he is not real. Additionally he plays a fraud because he is not a real inspector, but he does act as an Inspector. The inspector adds a great deal of tension and drama to the play. Priestley does this because he brings tension between the younger generation consisting of Sheila and Eric and the older generation consisting of Gerald, Mrs. Birling and Birling because of the inspector. Priestley uses the inspector as a substitute of him self to put his socialist points across this adds drama because we have to think about what he is trying to do. The four Birlings and Gerald are happily seated around the dinner table having an enjoyable night celebrating Sheila and Gerald's engagement. All of them are feeling happy and are comfortable and relaxed and do not seem to have a care in the world but all of that is about to change. The scene is set in 1912, which is a pre war time. Also this is the time when the suffragettes were fighting for women's rights. Additionally this was the time that the Titanic was built. The unsinkable ship, which ironically sank, would set sail in a week's time. The life that the Birlings live is very nice and easy but Priestley is showing how great things always end in disaster like the evening they are having. This is also ironic as he starts by telling us how the Titanic was unsinkable and it ended and just like he will go on to tell us how the Birling's lives are good at the moment but this will soon come to an end. ...read more.

Birling shows no signs of compassion for the death of an innocent girl and says arrogantly, "I care. I was almost certain for a knighthood in the next Honours List." This is what Birling is thinking about after all that has happened, therefore this reveals how selfish and self-centred he is. However, Sheila's thoughts are completely the opposite of this and she explains, "I behaved badly too. I know I did. I'm ashamed of it. But now you're beginning to pretend all over that nothing much has happened." This reveals that Sheila has strong emotions and feelings and cares that Eva Smith has died. She regrets the mistakes that she has made in the past and is trying to learn from them. It shows that she feels very guilty and responsible for the suicide and is a very sensitive and caring character. She has learnt her lesson, but believes that her parents are acting very irresponsibly and unintelligently. Later, she says to her father, "You don't seem to have learnt anything." This is a very realistic statement, and the audience know that Birling hasn't learnt anything. Contrasting this, Sheila has changed and matured a lot from prior to the Inspector visit. She has developed miraculously throughout the play, from acting like a young child, being na? and looking up to her parents to now, telling her father exactly what she thinks of him. We also discover that Sheila is an exceptionally intelligent character because she is the first person to start working things out, that the Inspector wasn't actually a real Police Inspector, commenting sharply and attentively, "Is that when the Inspector came...?" This is the start of the family uncovering the truth behind the unusual Inspector and Sheila's awareness and intelligence helps to reveal his true identity. Following Sheila's doubts about the Inspector being genuine, the older generation begin acting very differently. Birling thinks that, "It matters a devil of a lot," and "It makes all the difference," if the Inspector was a fake. ...read more.

He is also a voice for Eva and the lower members of the very hierarchical society that existed then. All this serves as an attempt to make all the Birlings reform their actions. The inspector manages to break each defence wall built up by the family yet as soon as he leaves, the Birling elders and Gerald fall back upon their faultless and self-assured lives. Sheila and Eric, however, seem much more emotionally and morally affected by the word of the inspector and show much more will to change their way of life. This brings the plot of the play to a conclusion; never the less Priestley uses this divided emotion to perform a final trick rather than providing a rational explanation. He gradually lulls the audience away form the boundaries of reality making the unexpected seem logical. His use of the last phone call is intended as a punishment for the family's refusal to appreciate what they have learnt. The phone call revives the guilt within each of the Birling elders and Gerald. Therefore giving the impression that there may be a possibility that the same inspector is may return, an infinite cycle until the lesson is learnt. The way in which Priestley wrote "An Inspector Calls," tells us more about the characters than they themselves know. We manage to satisfy our questions from the information yet are puzzled by the mystery and unforeseeable outcome. Conclusively "An Inspector Calls," is a relevant play that expresses the reality of desperation, especially at the time when it was written. By using his skill of incorporating the audience into his writing Priestley is able to get a strong and noticeable moral across that can express the true nature and purpose for writing the play. Ultimately the play realises that the truth cannot be hidden, there is always a witness to what happened, when and where. Although put into a supernatural context the moral remains the same within a thrilling and dramatic production "Those who do not remember the past are condemned to relive it." - Santayana ...read more.