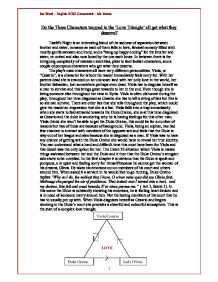 Do the Three Characters trapped in the 'Love Triangle' all get what they deserve?

Do the Three Characters trapped in the 'Love Triangle' all get what they deserve? Twelfth Night is an interesting blend of the sadness of separation between brother and sister, romance as each of them falls in love, farcical comedy filled with mostly gentle sarcasm and irony, and a "bang-up happy ending" for the brother and sister, re-united and also now loved by the one each loves. In between there is the intriguing complexity of mistaken identities, plots to fool foolish characters, and a couple of pompous characters who get what they deserve. The play's main characters all have very different personalities. Viola, or "Cesario", is a character for whom the reader immediately feels sorry for. With her parents dead she is stranded on an unknown land with her only love in the world, her brother Sebastian, lost somewhere perhaps even dead. Viola has to disguise herself as a man to survive and this brings great rewards to her in the end. Even though she is being someone else throughout her time in Ilyria. Viola is often dishonest during the play, throughout her time disguised as Cesario she has to tell a string of lies but this is so she can survive. ...read more.

Viola obviously has great psychological powers if she can turn a petulant man into a very caring and loving male figure. She is obviously a caring and honest character beneath all the lies in her life. At the end of the play Viola is re-united with her lost bother Sebastian, even if it was after a state of complete complication, and she marries the Duke Orsino. Viola gets her just rewards for the important and caring role she plays in the play. The Duke Orsino is often quoted as being un-deserving. The character gets a happy ending but arguably not the ending that is rightfully deserved. Viola successfully manages to change his attitude and ways of life. The Duke first appears to the reader as a very arrogant and bigheaded male. He feels as though everyone bows down to him but this is not the case. At no point during the play is the Duke really taught his manners, he just assumes he will always get his way. Perhaps when he and Viola do get married at the end is it undeserved on his half but perhaps that is weighed out by the fact that Viola is arguably the most deserving character in the play that deserves a just reward. ...read more.

Although it was Lady Olivia's servants and Sir Toby that played the prank, it was Lady Olivia that help invent for the idea. When Sebastian turns up at the end a very confusing end starts. With Olivia mistaking Sebastian for her twin sister Viola (Cesario). At the end Olivia and Sebastian get with each other, with Sebastian not knowing what is going on. This turns out to be quite lucky with Sebastian and Olivia then linking up. Sebastian is also reunited with his long sister Viola. I think that at the end of Twelfth Night Viola gets the rewards she justly deserves. She gets a man whom she loves and will cherish for the rest of her life. She is a very honest and caring character and for this reason I believe she deserves the man of her dreams. On the other hand, the Duke is a nasty piece of medicine and I don't believe that he deserves Viola. He is a love-sick fool and I think is worthy of no woman in Ilyria. Viola is also re-united with her lost twin brother who, quite conveniently, becomes the latest victim of Lady Olivia's craze. In the end most characters get a happy ending, but I believe only Viola gets the ending she deserves. ?? ?? ?? ?? Jon Wood - English GCSE Coursework - Mr. Moore 1 ...read more.