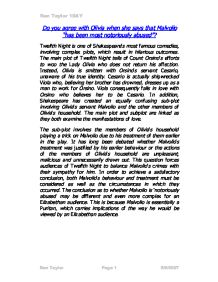 Do you agree with Olivia when she says that Malvolio

Do you agree with Olivia when she says that Malvolio "has been most notoriously abused"? Twelfth Night is one of Shakespeare's most famous comedies, involving complex plots, which result in hilarious outcomes. The main plot of Twelfth Night tells of Count Orsino's efforts to woo the Lady Olivia who does not return his affection. Instead, Olivia is smitten with Orsino's servant Cesario, unaware of his true identity. Cesario is actually shipwrecked Viola who, believing her brother has drowned, dresses up as a man to work for Orsino. Viola consequently falls in love with Orsino who believes her to be Cesario. In addition, Shakespeare has created an equally confusing sub-plot involving Olivia's servant Malvolio and the other members of Olivia's household. The main plot and subplot are linked as they both examine the manifestations of love. The sub-plot involves the members of Olivia's household playing a trick on Malvolio due to his treatment of them earlier in the play. It has long been debated whether Malvolio's treatment was justified by his earlier behaviour or the actions of the members of Olivia's household are unpleasant, malicious and unnecessarily drawn out. This question forces audiences of Twelfth Night to balance Malvolio's crimes with their sympathy for him. In order to achieve a satisfactory conclusion, both Malvolio's behaviour and treatment must be considered as well as the circumstances in which they occurred. ...read more.

He can even believe that Olivia loves him - "Maria once told me she (Olivia) did affect me". He is not in love with Olivia for herself, but for the status that comes with her, the luxurious lifestyle that this marriage could grant him. In the box-hedge scene he pictures himself sitting in state in a velvet gown, playing with a rich jewel, with seven servants jumping to obey his every command. The ridiculousness of this concept does not lie in Malvolio's humble status, because he is referred to throughout as a 'gentleman', and he realises that "the Lady of the Strachy married the yeoman of the wardrobe". What's more, Olivia regards him highly, which suggests that his ambitions are not totally absurd. Malvolio's treatment of the other members of Olivia's household is vital in understanding whether Malvolio ultimately got what he deserved. Malvolio, who is self-important and has little sense of humour offends Feste early on in the play by telling Olivia, 'I marvel your ladyship takes delight in such a barren rascal.' Olivia recognises Malvolio's snobbishness, telling him 'O, you are sick of self-love, Malvolio, and taste with a distempered appetite.' Malvolio proceeds to offend the other members of the household as well as further annoying Feste, Maria, Sir Andrew and Sir Toby by protesting against their drinking and singing late into the night. ...read more.

Malvolio is only human and has character flaws like everyone else; he did not really deserve the treatment he received since it caused him to lose his dignity and therefore leave his employment. By any standards, this is rather an extreme outcome of a practical joke. Malvolio's delusions seem harmless enough and the reason he may appear as a 'killjoy' is because it is his job to keep order and run errands for Olivia. At the end of the play, Malvolio finds himself excluded from the general feeling of joy and celebration amongst the other characters. It would be a hardhearted member of the audience who would not feel some sympathy and a degree of pity for the way things worked out for him. However, an Elizabethan audience member would react differently to Malvolio who would have an extra fault for them. As mentioned before, Malvolio is referred to as a Puritan, a member of a popular religious group. Puritans were responsible for the closing down of theatres because they considered it frivolous and would be despised by theatre audiences. This means Malvolio would be less likely to receive sympathy from an Elizabethan audience. Although Shakespeare did not like Puritans, he still causes both modern and Elizabethan audiences to question whether Malvolio was treated justly, which causes the final decision of whether Malvolio is 'notoriously abused' to be a very complicated one. Ben Taylor 10AY Ben Taylor Page 1 5/9/2007 ...read more.