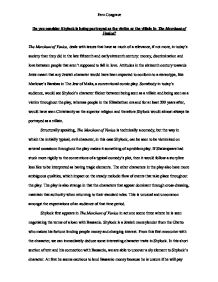 Do you consider Shylock is being portrayed as the victim or the villain in The Merchant of Venice?

Do you consider Shylock is being portrayed as the victim or the villain in The Merchant of Venice? The Merchant of Venice, deals with issues that have as much of a relevance, if not more, in today's society than they did in the late fifteenth and early sixteenth century: money, discrimination and love between people that aren't supposed to fall in love. Attitudes in the sixteenth century towards Jews meant that any Jewish character would have been expected to conform to a stereotype, like Marlowe's Barabas in The Jew of Malta, a conventional comic play. Somebody in today's audience, would see Shylock's character flicker between being seen as a villain and being seen as a victim throughout the play, whereas people in the Elizabethan era and for at least 200 years after, would have seen Christianity as the superior religion and therefore Shylock would almost always be portrayed as a villain. Structurally speaking, The Merchant of Venice is technically a comedy, but the way in which the initially typical, evil character, in this case Shylock, can be seen to be victimised on several occasions throughout the play makes it something of a problem play. If Shakespeare had stuck more rigidly to the conventions of a typical comedy's plot, then it would follow a storyline less like to be interpreted as having tragic elements. The other characters in the play also have more ambiguous qualities, which impact on the steady melodic flow of events that take place throughout the play. The play is also strange in that the characters that appear dominant through cross-dressing, maintain that authority when returning to their standard roles. This is unusual and uncommon amongst the expectations of an audience of that time period. Shylock first appears in The Merchant of Venice in act one scene three where he is seen negotiating the terms of a loan with Bassanio. Shylock is a Jewish moneylender from the Ghetto who makes his fortune lending people money and charging interest. ...read more.

She talks to Lancelot about her leaving and what it will be like when they and married, she says in an aside, "To be ashamed to be my fathers child." This shows how desperate Jessica is and confirms to the audience the role Shylock's character plays as villain in the plot. If his own daughter cannot live with him for fear of what he might do to her, it is understandable, that the other characters in the play dislike him. We can however sympathise with Shylock because of the circumstances that allowed Jessica and Lorenzo to leave for Belmont and also for the way in which Lorenzo and Jessica behaved before and after the elopement. Almost all of the Christian characters the audience had been introduced to so far, had something to do with the ease of their escape: Bassanio invited Shylock to dinner so as to give Jessica and Lorenzo adequate time to hide on Antonio's ship. The Duke deliberately called off the search as soon as he was made aware of Jessica's presence. In both of these cases, Shylock has been set up to allow Jessica to escape. This is one of the areas in the play where it can be seen as a 'problem play.' His suffering is starting to be beyond fairness or at the level of a comedy. If the plot had been constructed to act as a comedy, then it is unlikely that this scene would have worked in the same way. When Lorenzo elopes with Jessica, Shylock is being robbed of his rights over his daughter. This would have been recognised by an Elizabethan audience who would have understood these parental rights and so been able to sympathise with him. Because of their actions, both before and after the elopement, we would expect the audiences sympathies to remain on Shylock's side but the basis for sympathising with her comes from anti-Semitic prejudice against his desire that she should be faithful to her own religion. ...read more.

She said, that as he was a Jew, he was an alien in society and any alien that plotted against a true citizen of the state, a Christian, would be punishable by death, with his life in the hands of the Duke who determines what is punishment for a crime. In Shylock's case his individual punishment for conspiring to harm Antonio, was worse than death. He would have to give up half of everything he owned to his daughter and her new Christian husband. The other half had to go to Antonio, and Shylock was to become a Christian for the remainder of his life. This is the final point in the play where we feel pity towards Shylock because of the punishment he has to bear. This is opposed to the feeling that he got what he deserved as far as a punishment is concerned for all of the things he has done to numerous characters throughout the play. Shylock is the most memorable character in the play because of Shakespeare's excellent characterization of him. Shylock is in some ways presented as a typical scapegoat in the play, and he is easily portrayed as an evil character because he stands in the way of love, and so desperately seeks brutal revenge on Antonio. Shakespeare's manipulation of our feelings for Shylock is the one element that makes the play what it is. He gave Shylock the ability to make us hate him viciously and deeply sympathise with him at the same time. In today's society, where religion is on the whole less important to the lives of most people, I believe that sympathy for Shylock would prevail, as an audience would recognise that Shylock is subject to human frailties. In Shakespearean times however, Shylock would have been afforded no such pity. Religion structured society and those falling on the wrong side were considered to be in the wrong at the outset. Consequently, without doubt, Shylock would have been regarded as the villain of the piece. 3,021 words Fern Cosgrave ...read more.