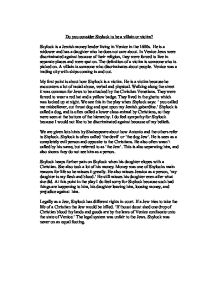 Do you consider Shylock to be a villain or victim

Do you consider Shylock to be a villain or victim? Shylock is a Jewish money lender living in Venice in the 1600s. He is a widower and has a daughter who he does not care about. In Venice Jews were discriminated against because of their religion, they were forced to live in separate places and were spat on. The definition of a victim is someone who is picked on. A villain is someone who discriminates about people. Venice was a trading city with ships coming in and out. My first point is about how Shylock is a victim. He is a victim because he encounters a lot of racial abuse, verbal and physical. Walking along the street it was common for Jews to be attacked by the Christian Venetians. They were forced to wear a red hat and a yellow badge. They lived in the ghetto which was locked up at night. We see this in the play when Shylock says: ` you called me misbeliever, cut throat dog and spat upon my Jewish gabardine.' Shylock is called a dog, and is often called a lower class animal by Christians, so they were seen at the bottom of the hierarchy. ...read more.

This shows us that they think he is lower than them and doesn't deserve their respect. The audience reaction to this is sympathy and sadness because everybody deserves respect, however this isn't the reaction he would have received in Elizabethans times as many people were anti-Semitic. It is a woman who brings Shylock to his knees. This must add more pain because in Shakespearian times women were considered possessions or a piece of furniture. Shylock doesn't realise that it is a woman because she is in disguise but if he did he would have felt terrible. This causes us to feel sympathy towards him because he doesn't know how terrible the situation is. On the other hand there are many ways in which Shylock is a villain. He fits the criteria for a stereotypical villain because he has money as a motive, treats women badly, he is excluded and he is willing to kill. I think Shylock has been trying to plot revenge for some time. Antonio as well as many other Christian disliked that he charged interest; `if I can catch him once upon the hip, I will feed the ancient grudge I bear him' Shylock tells us the grudge is old and he is prepared to use violence. ...read more.

This shows he doesn't have a good side to appeal to and is very evil, a nice person would have realised how cruel it was to refuse compensation for another human beings life. We don't have sympathy for him here. Shakespeare makes it very dramatic when Shylock sharpens his knife. This adds further drama. `Why dost thou whet they knife so earnestly,' Bassanio asks Shylock, who replies: `to cut the forfeiture from the bankrupt there,' Shylock shows us that he is over confident and assumes he will win the case. Shylocks use of the word `cut' shows us how much he is looking forward to hurting Antonio. This shocks the audience because it appears that Shylock is going to kill Antonio. This is where we lose all compassion for Shylock because he is merciless and is taking pleasure from the thought of hurting others. Even money doesn't mean anything to him anymore. In conclusion I can see that Shylock is a victim because he suffers a lot of racial hatred, and also he is referred to not by his name but as `the dog.' He is also a victim when his daughter elopes. However he is a villain towards Antonio and takes a lot of pleasure from the thought of others pain. So overall I believe that Shylock was a villain. ...read more.