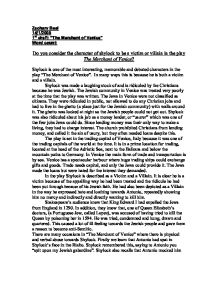 Do you consider the character of shylock to be a victim or villain in the play The Merchant of Venice?

Zachary Beal 14/1/2005 1st draft: "The Merchant of Venice" Word count: Do you consider the character of shylock to be a victim or villain in the play The Merchant of Venice? Shylock is one of the most interesting, memorable and debated characters in the play "The Merchant of Venice". In many ways this is because he is both a victim and a villain. Shylock was made a laughing stock of and is ridiculed by the Christians because he was Jewish. The Jewish community in Venice was treated very poorly at the time that the play was written. The Jews in Venice were not classified as citizens. They were ridiculed in public, not allowed to do any Christian jobs and had to live in the ghetto (a place just for the Jewish community) with walls around it. The ghetto was locked at night so the Jewish people could not get out. Shylock was also ridiculed about his job as a money lender, or "usurer" which was one of the few jobs Jews could do. Since lending money was their only way to make a living, they had to charge interest. The church prohibited Christians from lending money, and called it the sin of usury, but they often needed loans despite this. The play is set in the trading capital of Venice, Italy because it was one of the trading capitals of the world at the time. It is in a prime location for trading, located at the head of the Adriatic Sea, next to the Balkans and below the mountain paths to Germany. ...read more.

"I'll plague him, I'll torture him - I am glad of it." This shows the bitterness he feels for Antonio because he has been mocked so much and spat at. Shylock uses the words "plague" and "torture" which give a very powerful image of the extent of the hatred shown towards Antonio and the terrible, merciless revenge he plans. Although Shylock has an arguably unhealthy thirst for revenge, we can relate to what he is feeling because it is a natural human flaw to want to avenge wrongs and injustice. Shylock's passionate speech is designed to evoke the audience's sympathy: "I am a Jew. Hath not a Jew eyes? Hath not a Jew hands, organs dimensions, senses, affections, passions fed with the same food, hurt with the same weapons..." Shylock makes us feel sorry for him because he shows that the Christians' racism is affecting him. He is saying that Jews are human just like Christians and everyone is equal underneath their exterior. Shylock is trying to justify his lust for revenge on Antonio, by saying that Antonio has unjustly wronged him because of his religion. The use of the rhetorical questions increases sympathy and helps persuade the audience to think Shylock as a victim of racism. During the play, Shylock becomes more and more isolated. Firstly, his servant Lancelot Gobbo leaves his service to work with Bassanio, and then his daughter leaves him to elope with Lorenzo. Both Bassanio and Lorenzo are Christians, which again suggests that he is a victim of racism, or at least that he is forever being betrayed and hurt by Christians. ...read more.

Shylock complains his 'own flesh and blood' has deserted him but it was his fault she left because he showed no love to her: "Clamber not you up to the casements then nor thrust your head into the public street to gaze on Christian fools with varnish's faces.... Let not the sound of shallow foppery enter my sober house." This shows that Shylock did not let Jessica out of the house and restrained her because he did not trust her. He tried to make Jessica hate the Christian's as much as he did. Shylock used the words "Christian fools" and "shallow foppery" which shows that he has as much contempt for the Christians as they have for him. He contrasts his "sober" house, with their outlandish clothes and foolish behaviour. He orders Jessica around as if she were a slave, treating her as the Christians treated him. Shylock was taking out his frustration and pain on his daughter, so she had a good reason to leave. As you can see, there is a lot of evidence to support each of the two sides of the argument, 'Do you consider the character of Shylock to be a victim or villain in the play The Merchant of Venice?' I believe that Shylock was victimised by the Christians, and therefore a victim of racial abuse and ridicule. The case that Shylock is a victim is a stronger one than him being a villain. In the end, in my opinion it was the prejudice and oppression of Venetian society that caused his villainy. It even denied him the satisfaction of revenge. ...read more.