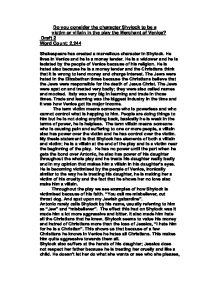 Do you consider the character Shylock to be a victim or villain in the play the Merchant of Venice?

Do you consider the character Shylock to be a victim or villain in the play the Merchant of Venice? Draft 2 Word Count: 2,244 Shakespeare has created a marvellous character in Shylock. He lives in Venice and he is a money lender. He is a widower and he is isolated by the people of Venice because of his religion. He is hated also because he is a money lender and the Christians think that it is wrong to lend money and charge interest. The Jews were hated in the Elizabethan times because the Christians believe that the Jews were responsible for the death of Jesus Christ. The Jews were spat on and treated very badly; they were also called names and mocked. Italy was very big in learning and trade in those times. Trade and learning was the biggest industry in the time and it was how Venice got its major income. The term victim means someone who is powerless and who cannot control what is happing to him. People are doing things to him but he is not doing anything back, basically he is weak in the terms of power, he is helpless. The term villain means someone who is causing pain and suffering to one or more people, a villain also has power over the victim and he has control over the victim. ...read more.

This is saying that Shylock has to take the bond but in the process of doing so if he were to shed one drop of blood, his lands and good will be taken away from him by the government in Venice. Portia also makes matters even more worse for him when she brings up the fact that he cannot take the bond because he denied it in front of the court,. He cannot escape without a penalty because he tried to harm a Christian and forces him to not have any choice but to take whatever is offered to him as punishment and he does accept. We feel very sorry for Shylock here because we can see that although he is trying to leave the bond, he knows it's impossible to fulfil what he wants without consequences. Shylock is suffering alot because Portia keeps making matters worse although she knows she has defeated him, she still wants to humiliate him even more. Shakespeare heaps further humiliation on Shylock by ensuring it is a woman who causes his downfall. In the time of Shakespeare they thought women to be less educated than men and were thought to be not as clever and not as powerful as men. ...read more.

I believe that in the beginning of the play Shylock is an equal villain and victim: he is a villain towards his daughter and when he writes the bond, but he is a victim when it comes to the Christian people and the running away of his daughter. But near the end of the play we see a lot of his villainous side and the side that wants to cause harm to human life. He is mostly a villain until the end of the play when the judge places the penalty and the "Jew" accepts it. This makes Shylock a victim especially the fact that he had to become Christian. All in all I feel that Shylock in this play was a victim and villain equally but if I was living in Shakespearian time I would have probably considered Shylock to be a villain because I would have a different point of view. In those times it was ordinary to consider Jews to be villains because of their religion. I think that the two main villainous parts of Shylock's behaviour were, the idea and continuation of trying to fulfil the bond and the treatment of his daughter. I think the two main features of Shylock being a victim is the fact that he was made to become Christian and all of the mocking and name calling that he experienced just because of his religion and because he was a money lender that charged interest. ...read more.