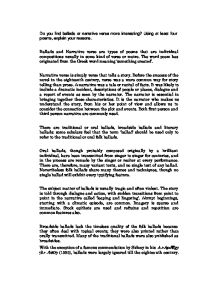 Do you find ballads or narrative verse more interesting? Using at least four poems, explain your reasons. Ballads and Narrative verse are types of poems that are individual compositions usually in some kind of verse or metre. The word poem has originated from the Greek word meaning 'something created'. Narrative verse is simply verse that tells a story. Before the success of the novel in the eighteenth century, verse was a more common way for story telling than prose. A narrative was a tale or recital of facts. It was likely to include a dramatic incident, descriptions of people or places, dialogue and a report of events as seen by the narrator. The narrator is essential in bringing together these characteristics. It is the narrator who makes us understand the story, from his or her point of view and allows us to consider the connection between the plot and events. Both first person and third person narrative are commonly used. There are traditional or oral ballads, broadside ballads and literary ballads: some scholars feel that the term 'ballad' should be used only to refer to the traditional or oral folk ballads. Oral ballads, though probably composed originally by a brilliant individual, have been transmitted from singer to singer for centuries, and in the process are remade by the singer or reciter at every performance. ...read more.

Often to be able to understand and relate more to the characters, we require more knowledge of them, and so without this, it is possible to lose interest from unbelievable characters. Adding to this, ballads scarcely give a place description. They contain minimal detail of surroundings. "Good Lord Graeme is no Carlisle gane, Sir Robert Bewick there met he, And arm in arm to the wine they did go, And they drank till they were both merie." This quote is taken from Graeme and Bewick. This verse is the only description found in that ballad about the place setting, meaning that with little information, the ballad can become dull, and does not capture your imagination. Many believe that a reason for such little description is the ballad background. From being passed down orally, the ballads may often have been simplified to make them easily remembered. This also accounts for changed and missing parts of many ballads. For this reason also, ballads will always follow a primitive verse pattern. Verses follow a four-line scheme, with a rhyming pattern usually of A B C B, with occasional verses of A B A B. Demon Lover shows this. "'O were have you been, my dear, dear love A This long seven years and more?' ...read more.

We also become involved and become interested by the intricate way in which the characters are introduced to us. This is shown in The Highwayman. "But the landlords daughter Bess the landlords daughter Plaiting a dark red love knot into her long black hair." By using more description, the characters become increasingly realistic, relating us to the poem. We have more understanding and so become more interested in the outcome. Narrative Verses will always revolve around a tale or story. They are set out in the same way, with a beginning, middle, and an end. This extract is taken from The Keeping of the Bridge. "With weeping and with laughter, still is the story told, How well Horatius kept the bridge in the brave days of old." This is the last section of The Keeping of the Bridge, which is rounding off its story. Like many others, this narrative verse also had an introductory verse, before leading into its tale, and a rounded off ending. All incidences that occur will usually be arranged like in a book or a story. Another characteristic of the narrative verse is shown in this quote, where the narrator will often be personal, involving you in the purpose of the poem, and reinforcing the idea of it being a tale told to you personally. In my opinion, narrative verse is more interesting than ballads from the very beginning due to the amount of detail and successful storytelling. ...read more.