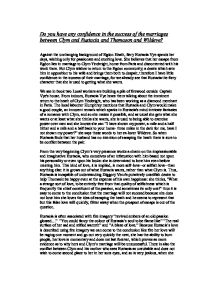 Do you have any confidence in the success of the marriages between Clym and Eustacia and Thomason and Wildeve?

Do you have any confidence in the success of the marriages between Clym and Eustacia and Thomason and Wildeve? Against the unchanging background of Egdon Heath, fiery Eustacia Vye spends her days, wishing only for passionate and exciting love. She believes that her escape from Egdon lies in marriage to Clym Yeobright, home from Paris and discontented with his work there. But Clym wishes to return to the Egdon community; a desire which sets him in opposition to his wife and brings them both to despair, therefore I have little confidence in the success of their marriage, for we already see that Eustacia the fiery character that she is used to getting what she wants. We see in book two Local workers are building a pile of firewood outside Captain Vye's house. From indoors, Eustacia Vye hears them talking about the imminent return to the heath of Clym Yeobright, who has been working as a diamond merchant in Paris. The local labourer Humphrey mentions that Eustacia and Clym would make a good couple, an innocent remark which sparks in Eustacia's mind intricate fantasies of a romance with Clym, and so she ...read more.

Eustacia is often associated with fire imagery "revived embers of an old passion glowed..." "You could fancy the colour of Eustasia's soul to be flame like" "The real surface of her sad and stifled warmth" and "A blaze of love." Because Eustacia's love is described using fire imagery we can come to the conclusion like fire her love will be raging one moment and go out very quickly the next, she has the ability to burn people, her love is momentary and does not last forever, which proves as more evidence as to why hers and Clym's marriage will be unsuccessful. There is also the conflict between Clym and his mother who sees Eustacia as unsuitable and does not wish to come second place to her in her sons eyes, and so is very jealous, when she dies Clym comes to the realisation of what part Eustacia played in the part of his mothers death, which causes friction between the two lovers. The other pairing on the heath is that of Thomasin Yeobright and Damon Wildeve, I feel that there marriage is also doomed not to succeed. ...read more.

So, in the novel, the innocent suffer too, though not irreparably, however my point of view is that Thomasin has been hardened by her ill treatment and intends to marry Wildeve but not be walked over, this is not a good basis for a marriage and I feel sees that it does not succeed because of a lack of real love, and that both couples are wrongly paired! In Hardy's pessimistic point of view "we live to suffer we are playthings for the gods" Hardy would not have wanted the marriages to succeed and have a happy ever after ending because it would not be true to real life. People do not always end up happy and more often then not they are sad and alone. The marriages did not succeed because if they had it would mean a change in the heath and as we can see from the opening of the book "the face upon which time had but little impression" it had not changed it was untameable and would not change for many years to come. ...read more.