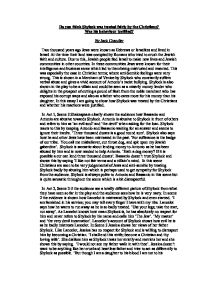 Do you think Shylock was treated fairly by the Christians?Was his behaviour justified?

Do you think Shylock was treated fairly by the Christians? Was his behaviour justified? By Jack Chandler Two thousand years ago Jews were known as Hebrews or Israelites and lived in Israel. At the time their land was occupied by Romans who tried to crush the Jewish faith and culture. Due to this, Jewish people fled Israel to make new lives and Jewish communities in other countries. In these communities Jews were known for their intelligence and business sense which led to them being mistrusted and resented. This was especially the case in Christian terms; where anti-Semitic feelings were very strong. This is shown in a Merchant of Venice by Shylock who constantly suffers verbal abuse and gives a vivid account of Antonio's racist bullying. Shylock is also shown in the play to be a villain and could be seen as a miserly money lender who delights in the prospect of cutting a pound of flesh from the noble merchant who has exposed his corrupt ways and also as a father who cares more for his money than his daughter. In this essay I am going to show how Shylock was treated by the Christians and whether his reactions were justified. In Act 1, Scene 3 Shakespeare clearly shows the audience how Bassanio and Antonio are abusive towards Shylock. ...read more.

He says like everyone else, Jews will take revenge when needed. Also, when Jessica can't be found he becomes very horrid and his reaction to her running away is very extreme. 'I would my daughter were dead at my foot, and the jewels in her ear. Would she be hearsed at my foot, and the ducats in her coffin'. He is more worried about losing his money and jewels that she stole than losing his daughter which is very cruel and un-father-like. When we see Antonio going to jail as he can't pay the bond in Act 3, Scene 3 the audience see the cruelty of Shylock again but some of his actions in this scene can be justified even though they are extreme. Shylock and Antonio made a bond and Shylock only wants what is rightfully his. 'To Christian intercessor. Follow not; I'll have no speaking. I will have my bond'. Shylock shows his true feelings of Antonio and says how he thinks he is stupid, 'This is the fool that lost out money gratis'. He also warns Antonio to beware as he will get revenge for Antonio's mistreatment of Shylock and is perhaps gloating at the situation Antonio is in, 'Thou call'dst me a day before thou hadst a case, but since I am a dog beware my fangs'. ...read more.

'I am content'. I think the punishments were fair, taking in the fact that Shylock was prepared to kill a man for revenge which is not justified of Shylock, so he deserved what he got when it back fired. The Merchant of Venice is a play about a rich, proud Jewish man who loses everything out of revenge. Shylock wanting revenge is perhaps justified as he is mistreated throughout the play and made fun of and not treated as an equal by Christians. His actions and responses are not always justified as he can be quite rude but sometimes his responses to abuse is respectable as he isn't rude to Salerio and Solanio when they taunt him and show prejudice to him which shows a kinder more decent side to him which is perhaps just an image he presents which would show how cunning he is. His decision to follow up his bond with Antonio when he couldn't pay back the money back fired on him in the end and his cruelty to not let him off ended him up in trouble and losing him everything which is perhaps the message Shakespeare is trying to give in the play. I think the play is anti-semitic in my opinion, as Christians throughout show lack of respect to Shylock, at times for his religion. Shakespeare also gives Shylock a bad image and attitude for most of the play which is perhaps a little anti-semitic. ...read more.