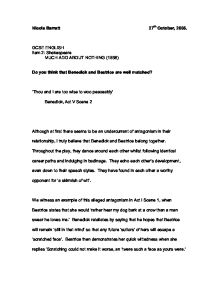 Do you think that Benedick and Beatrice are well matched?

Nicola Barratt 27th October, 2005. GCSE ENGLISH Item 2: Shakespeare MUCH ADO ABOUT NOTHING (1598) Do you think that Benedick and Beatrice are well matched? 'Thou and I are too wise to woo peaceably' Benedick, Act V Scene 2 Although at first there seems to be an undercurrent of antagonism in their relationship, I truly believe that Benedick and Beatrice belong together. Throughout the play, they dance around each other whilst following identical career paths and indulging in badinage. They echo each other's development, even down to their speech styles. They have found in each other a worthy opponent for 'a skirmish of wit'. We witness an example of this alleged antagonism in Act I Scene 1, when Beatrice states that she would 'rather hear my dog bark at a crow than a man swear he loves me.' Benedick retaliates by saying that he hopes that Beatrice will remain 'still in that mind' so that any future 'suitors' of hers will escape a 'scratched face'. Beatrice then demonstrates her quick wittedness when she replies 'Scratching could not make it worse, an 'twere such a face as yours were.' This exchange is a prime example of the active hostility between the two; however, if one were to witness this skirmish, the tone of antagonism would perhaps include accents of a humorous nature, as well as tetchiness. ...read more.

. . . 'In time the savage bull doth bear the yoke' suggests his conviction that love does eventually conquer all, even those as stubborn as Benedick. Both Benedick and Beatrice are playing a role in their 'war': whereas Benedick is the part of the misogynist and Beatrice is that of the misandrist. Each makes a series of statements in this role, which demonstrate their public beliefs. Benedick makes three misogynistic comments. In the first, he states that he 'truly loves none'; in the second, he is a 'professed tyrant' to the fairer sex and in the third he announces that he 'will live a bachelor'. Benedick is called a 'contemptible spirit' in that he does not respect women's feelings towards him. Meanwhile, Beatrice is enjoying her role by demonstrating an antipathy towards men. Firstly, she says that she would 'rather hear a dog bark at a crow than a man swear he loves me'; secondly, she says that she 'can see a church by daylight': in other words, she will not be tricked into marriage. Thirdly, she calls a man 'a clod of wayward marl', which is a misandristic metonym. In return, she is called 'Lady Disdain' and 'Lady Tongue' because of her cold and scornful manner towards men. ...read more.

If thou dost love, my kindness shall incite thee To bind our loves up in a holy band' -which is used to signify the acceptance of her love for Benedick. Benedick and Beatrice, however, are 'too wise to woo peaceably' and after these scenes, we witness both Benedick and Beatrice showing symptoms of lovesickness. Whereas Benedick is suffering from 'the toothache', Beatrice has a cold ('I am stuffed, cousin, I cannot smell'). In conclusion, Beatrice and Benedick are perfectly suited, even down to the structure of their language. There is a form of stichomythia - rapid, stylized dialogue involving an exact symmetrical correspondence between their responses. Their exchanges contain syntactical parallelism- BENEDICK: They swore that you were almost sick for me. BEATRICE: They swore that you were well-nigh dead for me. -in that the syntax remains the same but their vocabulary changes (almost sick/ well-nigh dead). It is almost as if they are consummating their love rhetorically. Throughout the play, both Benedick and Beatrice take an identical journey of self-discovery in which they accept their feelings for each other, and balance their souls. They have become complete. In the end, we see that Benedick and Beatrice end up married and that Benedick has found the way to 'stop the mouth' of 'Lady Tongue': to kiss her. ...read more.