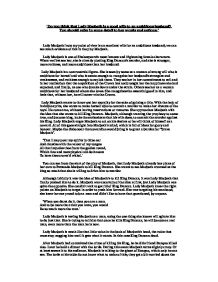 'Do you think that Lady Macbeth is a good wife to an ambitious husband? You should refer in some detail to her words and actions.'

'Do you think that Lady Macbeth is a good wife to an ambitious husband? You should refer in some detail to her words and actions.' Lady Macbeth from my point of view is an excellent wife for an ambitious husband; we can see much evidence of this in the play Macbeth. Lady Macbeth is one of Shakespeare's most famous and frightening female characters. When we first see her, she is already plotting King Duncan's murder, and she is stronger, more ruthless, and more ambitious than her husband. Lady Macbeth is a controversial figure. She is seen by some as a woman of strong will who is ambitious for herself and who is astute enough to recognise her husband's strengths and weaknesses, and ruthless enough to exploit them. They see her in her commitment to evil and in her realisation that the acquisition of the Crown has not brought her the happiness she had expected, and finally, as one who breaks down under the strain. Others see her as a woman ambitious for her husband whom she loves. ...read more.

She couldn't wait to get rid of King Duncan. Lady Macbeth knew the right points on Macbeth to target in order to push him forward. She was targeting his manhood, she knew he was proud to be a man and didn't like to have that questioned, by anyone. 'When you durst do it, then you are a man. And to be more than that you were, you would Be so much more the man.' Lady Macbeth is testing Macbeth as a man, using the one thing she knows will agitate him to do just that. She is trying to tell him that once he kills King Duncan, he will become a real man, even more than the man he is now. Lady Macbeth is much like that little voice in the back of Macbeth's head, the voice that wont stop nagging him until it gets what it wants. In this case King Duncan dead. After Macbeth had committed the crime of killing his King, he had his friend Banquo killed also. ...read more.

Lady Macbeth has played an important role here, as she has helped Macbeth get back onto his feet. Lady Macbeth tells Macbeth that even a woman like herself could be more of a proper man he is at the moment. And without a doubt this gets Macbeth mad at the thought of it. This pushes Macbeth even more to try and prove himself as a man to his wife and everyone one else. And the way he see's fit to do this is to kill more and more people. Throughout the play of Macbeth, Lady Macbeth proves to be very vicious and appears to have little heart for other than herself and Macbeth. Lady Macbeth has proved that she knows how to get Macbeth moving, she knows his sensitive areas, just like his manhood. Lady Macbeth is the kind of wife that a politician would dream about having. She does not appose when her husband wants to go out and kill someone, in fact she encourages him to do so. And when one of their cunning plans falls back on them she does all that she can to try and cover up the mistake and be loyal to her husband, whatever he is faced with. ...read more.

When considering the character of Lady Macbeth, it is very important to look at her changing character - how she begins as a strong, dominant wife but becomes a character so riddled with guilt that she drives herself mad and takes her own life. This essay makes some good points but doesn't consider her role over the whole play which is something that must be done when analysing any character and their role in a play.