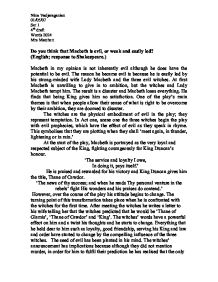 Do you think that Macbeth is evil, or weak and easily led?

Do you think that Macbeth is evil, or weak and easily led? (English; response to Shakespeare.) Macbeth in my opinion is not inherently evil although he does have the potential to be evil. The reason he became evil is because he is easily led by his strong-minded wife Lady Macbeth and the three evil witches. At first Macbeth is unwilling to give in to ambition, but the witches and Lady Macbeth tempt him. The result is a disaster and Macbeth loses everything. He finds that being King gives him no satisfaction. One of the play's main themes is that when people allow their sense of what is right to be overcome by their ambition, they are doomed to disaster. The witches are the physical embodiment of evil in the play; they represent temptation. In Act one, scene one the three witches begin the play with evil prophecies, which have the effect of evil as they speak in rhyme. This symbolises that they are plotting when they shall 'meet again, in thunder, lightening or in rain.' At the start of the play, Macbeth is portrayed as the very loyal and respected subject of the King, fighting courageously for King Duncan's honour. ...read more.

He knows this is morally wrong and reminds himself that he is King Duncan's kinsman, his host and subject and while staying in his castle he should be protecting the king. He eventually decides not to commit the murder, and tells his wife. 'We will proceed no further in this business.' However, he was not prepared for Lady Macbeth's rage and abuse and she persuades him to carry out the murder. She questions her husband's courage and calls him a coward, 'Art thou afeard. To be the same in thine own act and valour ... And live a coward in thine own esteem.' She insults his virility and declares that she would have murdered her child while it was feeding at her breast, rather than break such a promise as Macbeth had done. Defeated by his wife's scorn and persuaded by her encouragement, Macbeth agrees to murder his King. She plans the murder and came up with the idea of framing the guards and then killing them. She took advantage of her weak husband and after the murder she takes charge of the situation, while Macbeth is in a state of shock and terror. ...read more.

Hail to thee, Thane of Glamis! All hail, Macbeth! Hail to thee, Thane of Cawdor! All hail, Macbeth! That shalt be King hereafter.' The first of which leads to the callous murder of Macduff's family while he went to London. This was an act of destruction on behalf of Macbeth from the witches. He killed Macduff's wife and children as he had become an evil twisted man who never thought twice before doing anything. We cannot forget the fact the at the beginning of the play Macbeth is described as 'noble' and 'valiant', aware of good and evil, right and wrong. He did try to resist the temptation at first but he was unable to resist and succumbed to Lady Macbeth's persuasion. His wife and the three witches play upon Macbeth's weakness and they succeed in manipulating him. Although his downfall was not entirely his own fault, he did choose the path of evil and thus started a disastrous chain of events. Although Macbeth battled with his conscience and deep feelings of guilt, he was unable to retain his good character and ultimately his eventual downfall. What was an honorable and courageous man progressively turned more and more evil throughout the play. Nina Vadjaraganian 20/06/02 Set 1 4th draft Words 2024 Mrs Matchett ...read more.