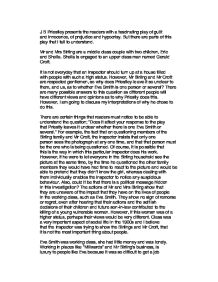 Does it affect your response to the play that Priestly leaves it unclear whether there is one Eva Smith or several?

J B Priestley presents the readers with a fascinating play of guilt and innocence, of prejudice and hypocrisy. But there are parts of this play that i fail to understand. Mr and Mrs Birling are a middle class couple with two children, Eric and Shelia. Shelia is engaged to an upper class man named Gerald Croft. It is not everyday that an inspector should turn up at a house filled with people with such a high status. However, Mr Birling and Mr Croft are respected gentlemen, so why does Priestley leave it so unclear to them, and us, as to whether Eva Smith is one person or several? There are many possible answers to this question as different people will have different views and opinions as to why Priestly does this. However, I am going to discuss my interpretations of why he chose to do this. There are certain things that readers must notice to be able to understand the question; "Does it affect your response to the play that Priestly leaves it unclear whether there is one Eva Smith or several." ...read more.

Again, Gerald has the power because of his wealth and status. Once he has had enough of her, he gets rid of her. "...And by that time, I knew Daisy knew it was coming to an end so I broke it off definitely". The relationship that Eva has with Eric at first seems deeper than the temporary fling that she has with Gerald. But impressions of this are confused when eric says, "I didn't love her or anything." I know this because when Eva learns that she is pregnant, Eric offers to marry her. Gerald would not have done this. However, Eva is still the weaker of the two. It is no surprise when Eva learns that she is pregnant with Eric's child, as it was almost impossible to get hold of contraception if you were not married. At this point, Eva feels that she cannot go on. When she asks Mrs Birling for help, Mrs Birling refuses. The only way for a lower class woman with no job to survive, is by turning to prostitution. Eva decided to keep her dignity and decided that death was an easier option for her to choose. But this of course is not true. ...read more.

As soon as Birling finds out about Eric's involvement in the whole situation he loses his confidence; "Look Inspector you're not trying to tell us that my boy is mixed up in all this?" Birling is scared mainly for himself and what it would do to his knighthood. Also, of what the whole situation would do to his general public image. At this point I think that the Inspector is partially successful. I think that Birling understands what the Inspector sets out to do. He seems to understand that the way he treats people may not be the way he should. I therefore conclude that it does affect my response to the play that Priestly leaves it unclear whether there is one Eva Smith or several. This play has a political message and it is important that the readers see Eva as a representative figure of a whole class of people, who go through the same thing everyday. The play also has an emotional impact, especially for the other characters. However, I like the fact that I do not know whether there is more than one Eva Smith because it lets the other characters think about what they say and do to people and it allows them to understand that "class" is a social grouping and only a psychological barrier. ...read more.