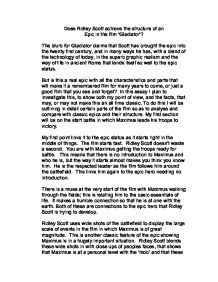 Does Ridley Scott achieve the structure of an Epic in the film 'Gladiator'?

Does Ridley Scott achieve the structure of an Epic in the film 'Gladiator'? The blurb for Gladiator claims that Scott has brought the epic into the twenty first century, and in many ways he has, with a blend of the technology of today, in the superb graphic realism and the way of life in ancient Rome that lends itself so well to the epic status. But is this a real epic with all the characteristics and parts that will make it a remembered film for many years to come, or just a good film that you see and forget? In this essay I plan to investigate this, to show both my point of view, and the facts, that may, or may not make this an all time classic. To do this I will be outlining in detail certain parts of the film so as to analyse and compare with classic epics and their structure. My first section will be on the start battle in which Maximus leads his troops to victory. My first point links it to the epic status as it starts right in the middle of things. The film starts fast. Ridley Scott doesn't waste a second. You are with Maximus getting the troops ready for battle. ...read more.

Again there is a muse to the humble earth and his farming backgrounds. Then there is also a supernatural yet humble element when he makes eye contact and calms a dog that looks wolf like, this links him to something outside the battle, to a bigger more important place or thing. The coming through the fire gives a dramatic effect that he is mighty and powerful again riding with the wolf. After this it goes into a long slow-motion of the fight, following Maximus, creating tension and dramatic effect. This helps to make the film evolve to greater stature in the watcher's mind and Maximus to be shown in full fighting glory. My next feature scene is the scene where Maximus fights alone and becomes a well known gladiator, then at the end throws a sword into the crowd and asks 'are you entertained?' again showing that he is above the mob, but still wants to help them. Ridley Scott does this in such a way to make it dramatic and tense while making him seem courageous not stupid. After this Maximus goes to the Coliseum in Rome and fights there. He is in a battle where he, and other slaves, are told they will die and should die with honour. ...read more.

But Maximus is above it and fights on to get to a winning position. When Commodious asks one of the men for a sword, they refuse. This is compared to the respect they gave Maximus at the start, showing they do not respect Commodus. Commodus then draws a dagger against the unarmed Maximus, but still can't kill him. Maximus shows almost impossible strength, fighting through injury, again showing characteristics of an epic hero. When Commodus is dead, Maximus only asks for the slaves to be released, the senator to be reinstated and a democracy formed, saying that there was a dream called 'Rome' and that 'these were the last wishes of Marcus Orilious'. This shows he is selfless and is not doing it for himself. He is doing it for the nation which is a classic epic structure. There are a few characteristics of epic structure that are not shown in the film, for example, he is not (as far as we know) descended from, or looked after by the gods. He is trying to get revenge and there is little listing of former heroes as he is descended from farmers. In conclusion, I think that Ridley Scott has successfully brought the structure of an epic into the twenty first century with a superb film that has an excellent blend of technology and history, but it is not a film that in one hundred years time will be deemed a classic. ...read more.