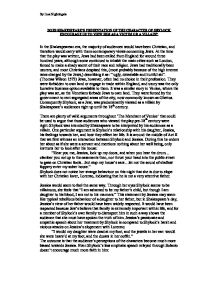 Does Shakespeare&amp;#146;S Presentation of the Character of Shylock Encourage Us To View Him As a Victim or a Villain?

DOES SHAKESPEARE'S PRESENTATION OF THE CHARACTER OF SHYLOCK ENCOURAGE US TO VIEW HIM AS A VICTIM OR A VILLAIN? In the Shakespearean era, the majority of audiences would have been Christian, and therefore would carry with them contemporary views concerning Jews. At the time that the play was written, Jews had been exiled from England for around three hundred years, although some continued to inhabit the main cities such as London, forced to make a shady secret of their race and religion. Jews had traditionally been usurers, and most Christians despised this, (most probably because of the high interest rates charged by the Jews,) describing it as: " ugly, detestable and hurtful sin". (Thomas Wilson 1572) Jews, however, often had no choice in their profession. They were forbidden to own land or engage in trade within England, and usury was the only lucrative business option available to them. It was a similar story in Venice, where the play was set, as the Venetians forbade Jews to own land. They were forced by the government to rent segregated areas of the city, now commonly known as Ghettos. Consequently Shylock, as a Jew, was predominantly viewed as a villain by Shakespeare's audiences right up until the 18th century. There are plenty of valid arguments throughout 'The Merchant of Venice' that could be used to argue that those audiences who viewed the play pre-18th century were right: Shylock was intended by Shakespeare to be interpreted by his audiences as a villain. One particular argument is Shylock's relationship with his daughter, Jessica, his feelings towards her, and how they effect her life. It is around the middle of Act II that we first witness an interaction between Shylock and Jessica. During this he orders her about as if she were a servant and mentions nothing about her well being, only instructs her to look after his house: "Hear you me, Jessica, lock up my doors, and when you hear the drum... ...read more.

Shylock seems intent on mimicking the Christians behaviour towards him, although he has often complained vehemently about their behaviour towards him in the past. It seems villainous of him now to do to them what he has previously deplored when the victims of the behaviour were reversed. It is during the trial scene and the scenes immediately before it that his obsessive hatred towards Antonio is clearly revealed. His repetition of "I'll have my bond" shows him to be openly aggressive and agitated. He warns those who have treated him as 'a dog' in the past to 'beware my fangs'. The reference to the dog also comes earlier in the play, when the bond is first being discussed, linking the two scenarios, and signifying their importance to one another: "You call me misbeliever, cut-throat dog." (Act 1, scene iii) " Thou be damned inexecrable dog." (Act 4, scene i) The dehumanisation of Shylock finally occurs in the court scene, but elements of it have been stacking up against him one-by-one throughout the play, until he has transformed into the cultural image of the Jew that Christians have been brought up to create wild superstitions about. Shylock's wild nature in the courtroom is emphasised by the contrast between his and Antonio's behaviour. Antonio has realised Shylock will not listen to reason and has resigned himself to his fate: "Let him alone, I'll follow him no more with bootless prayer." Shylock's promise to himself and the audience to destroy Antonio continues during Act 4 in the trial scene. He refuses to show mercy when asked both by Portia and the Duke: "on what compulsion must I? Tell me that." Shylock is legally right, but Shakespeare is perhaps trying to convey to his audiences that morally he is obliged to show mercy as Portia's speech explains to him: "The quality of mercy is not strain'd...it is twice bless'd; it blesseth him that gives and him that takes." ...read more.

It would strike a modern day audience as unfair that the severity of his punishment reflects not his crime, but his race. He is a victim of the Christians' racism. Although he too is racist, and his crime partially reflects his racism, one person's racism cannot stand up to a whole city's racism. In conclusion, I believe that ultimately Shylock is a villain. The way in which he treats those that he is close to, for example his daughter Jessica, exposes his vindictive and evil character. He lets his want for vengeance surpass all other aspects of his life and his complete lack of mercy towards Antonio renders him a villain in the eyes of the audience, as fellow Christians to Antonio. I do, however, think that Shakespeare was also trying to persuade Christians in the audience that perhaps those who are different in society do deserve some forgiveness. Although Shylock was mostly believed to be a villain, I feel that Shakespeare used elements of his character to show to his audiences the unfairness of their highly prejudiced society. I think that Shylock was intended to be a victim. That he was created merely for the purpose of challenging Elizabethan ideologies. Through Shylock, Shakespeare is able to explore the way in which the line between the oppressed and the oppressor can often become blurred. If I was to play Shylock in a production of 'The Merchant of Venice' I would play him as though he was a victim, as that is how I believe Shakespeare intended him to be played. I would keep him as a dignified, although devious, character until his loss of Jessica. For Shylock I feel that the loss of Jessica is the pivotal part of the play, therefore after this loss, I would attempt to play him becoming more and more demented with rage, and finally show his complete loss of dignity at the trial. ?? ?? ?? ?? By Lisa Nightingale ...read more.