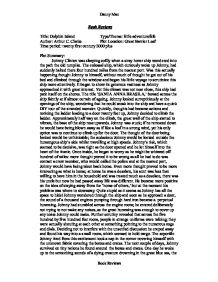 Book Reviews Title: Dolphin Island Type/Theme: little adventure/life Author: Arthur C. Clarke Plot Location: Great Barrier Leaf Time period: twenty first century 2000 plus Plot Summary: Johnny Clinton was sleeping softly when a stray hover ship wondered into the path the old turnpike. The colossal ship, which curiously woke up Johnny, had suddenly halted there four hundred miles from the nearest port. Was this actually happening thought Johnny to himself, without much of thought he got out of his bed and climbed through the window and began his little voyage to scrutinize this ship more attentively. It began to show its generous vastness as Johnny approached it with great interest. Yet this climax was not near close, this ship had park itself on the shores. The title 'SANTA ANNA BRASILA,' bowed across the ship faintly at if almost certain of ageing. Johnny looked surreptitiously at the openings of the ship, wondering that he could sneak into the ship and have a quick DIY tour of the stranded monster. Quickly, thoughts had became actions and noticing the ladder leading to a door twenty feet up, Johnny decided to climb the ladder. Approximately half way on the climb, the great wall of the ship started to vibrate, the base of the ship rose upwards. ...read more.

Then behind him he saw the dolphins pushing the box, each fin seemed to rotate in turns as Johnny was being taken to somewhere. These dolphins were helping Johnny, yet Johnny had no energy to stay on and fainted on the spot. Amid all this generosity, Johnny woke up faintly and heard a man's voice calling for help. When Johnny awoke, he was lying on a great white bed with an enormous women asked him whether he was all right. All Johnny saw was his legs red angry with patches of skin peeling off, he was ok though he had survived. The next time he woke up, he was taken to the doctor and the doctor asked for his story. The doctor had already found out who he was and where he came from. The doctor already told the police and the next time a ship comes by, Johnny would be taken back home. To Johnny's disappointed, he had came all this way to be taken back, but then he was told he had eight days until the nearest ship would come so he had time to explore. Johnny almost fully recovered from his venture was taken a little tour of the island. All around the island it was a small town, which was deeply involved with the sea; his first couple days was spent with Prof. ...read more.

But she knew they would come back, so she salvaged all she could and set off into the sea. She sailed for days, but could find no boats to help her, all her rations had gone and longer had she hope for people to help her. Her 'stimulus of hope,' proved to be helping as she saw a nearby island and landed ashore. Twenty years later, a body was found on this island. The ship sinking Johnny was all alone when he found out that the ship was on fire, had he not climbed onto the ship he would have been safe and sound at home. Though he had not regretted his sudden exit and fought on to save life. The ship was abandoned, no one was onboard, Johnny was all alone and he had to live. The only choice was to jump into the sea or otherwise, he would have died with the gigantic ship. What did I enjoy most: I liked the idea of leaving everything and starting a whole new life somewhere, but things are not always perfect; Johnny's risk was a life and death matter and the author did well to show this. What did I enjoyed least: There wasn't much that I didn't like but I was disappointed that there wasn't anything else on the prediction of the Prof's theory that terrestrial life had encountered the earth a thousands of years ago. Danny Man Book Reviews ...read more.