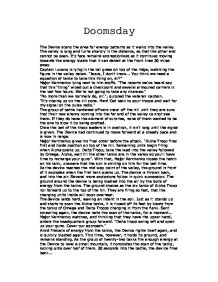 Doomsday The Device scans the area for energy patterns as it walks into the valley. The valley is long and turns sharply in the distance, so that the other end cannot be seen. It's face remains expressionless as it continues moving towards the energy blasts that it can detect at the front lines 30 miles away. Captain Lucano is lying in the tall grass on top of the ridge, watching the figure in the valley below. "Jesus, I don't know... You think we need a squadron of tanks to take this thing on, sir?" Major Kerchenko lying next to him scoffs. "The reports we've heard say that this "thing" wiped out a checkpoint and several armoured carriers in the last few hours. We're not going to take any chances." "No more than we normally do, sir.", quipped the veteran captain. "It's closing up on the kill zone. Men! Get back to your troops and wait for my signal on the pulse radio." ...read more.

Just as it stands up and starts to scan the Alpha tanks, it is ripped off its feet by blasts from the tanks of Omega and Delta Troops charging in from the flank. Sent sprawling again, the device halts the scan of the tanks, for a moment... Major Kerchenko watches, and thinking that they have the upper hand, orders the headquarters group forward. "Delta troop swing left and open up your guns. Cover our approach." Amid fireballs of energy from the tanks, the Device rights itself again, and is quickly blasted again. This time, however, it holds its ground, and remains standing. As the group of twenty-two tanks fire enough energy at the Device to level a small mountain, it completes the scan of the tanks, locking onto over half of them. 30 seconds into the battle, the device fires back... The Device unleashes a blinding white light at Alpha Troop, and four of the six tanks suddenly explode, splattering the two remaining tanks with burning, white hot, melted armour. ...read more.

In total disarray, the remaining tanks, fewer than half that had started the attack, are now retreating at full speed. Though firing wildly at the Device, trying to cover their own escape, the Device blows up the remaining tanks before they can get over the ridge and to momentary safety. Only one tank, Major Kerchenko's, makes it to the ridge, only to be exploded into a fireball that can be seen for many miles. The Device scans for any remaining enemy and drops out of battle mode. It takes a few moments to gather information about what it had just encountered. It walks up to a tank that has a large burning hole in its frontal armour. The Device pays particular attention to the symbols on the tank and the form of the tank itself. In the future it will not wait to determine the nature of such items before firing on them. The Device turns, facing back towards the front lines again, and walks the remaining length of the valley and beyond, leaving the squadron of burning tanks and men behind. ...read more.