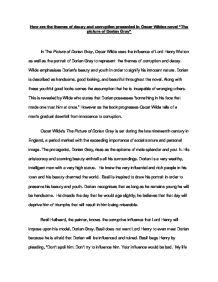 How are the themes of decay and corruption presented in Oscar Wildes novel "The picture of Dorian Gray" In The Picture of Dorian Gray, Oscar Wilde uses the influence of Lord Henry Wotton as well as the portrait of Dorian Gray to represent the themes of corruption and decay. Wilde emphasises Dorian's beauty and youth in order to signify his innocent nature. Dorian is described as handsome, good looking, and beautiful throughout the novel. Along with these youthful good looks comes the assumption that he is incapable of wronging others. This is revealed by Wilde who states that Dorian possesses "something in his face that made one trust him at once." However as the book progresses Oscar Wilde tells of a man's gradual downfall from innocence to corruption. Oscar Wilde's The Picture of Dorian Gray is set during the late nineteenth century in England, a period marked with the exceeding importance of social stature and personal image. The protagonist, Dorian Gray, rises as the epitome of male splendor and youth. His aristocracy and stunning beauty enthralls all his surroundings. Dorian is a very wealthy, intelligent man with a very high status. He knew the very influential and rich people in his town and his beauty charmed the world. ...read more.

It is this ideology of Lord Henry that causes Dorian to place beauty and youth above everything else. He remarks of the "common, rough people, with their coarse faces and brutal gestures" while in the theatre watching Sybil Vane, acting as if they were beneath him due to their unflattering exterior. Dorian becomes obsessed with Sybil's good looks and her ability to control her audience making them " weep and laugh as she wills them to do" Ironically, it is this influence on those around her that makes her the most appealing to Dorian, much like Lord Henry's ability to influence Dorian. Lord Henry emphasises the power of youth and beauty even more by saying, "It has its divine power of sovereignty. It makes princes of those who have it". These statements are all suggesting that life has no meaning once you no longer have your youth and beauty and that it is these characteristics that truly give someone innocence and power. The well meaning artist Basil Hallward presents young Dorian Gray with a portrait of himself. After discussing with cynical Lord Henry Wotton, Dorian makes a wish which dreadfully affects his life forever. He wishes, "to be always young" and the picture, "too grow old!" ...read more.

Dorian's actions stray or contrast to what is believed acceptable in society the portrait punishes Dorian by taking away the two qualities which Dorian holds dearest to him, youth and beauty, thus making him aware of his corrupt actions and in the end condemning him to death. Society holds within itself morals and values that must be adhered to. It is this fear that keeps him constantly running back to check the portrait making sure it has been undisturbed, inevitably making him a prisoner in his own house. When this becomes too much to endure Dorian stabs the portrait with the same knife he killed Basil in hopes of destroying the portrait and ultimately himself. Several types of corruption are portrayed in The Picture of Dorian Grays such as the nature of society, supremacy of nature and youth and negative influences. I believe the most significant one is Lord Henry's influence which causes Dorian to falter as he fails to establish and live by his own moral code. Lord Henry is a man possessed with "wrong, fascinating, poisonous, delightful theories" which starts down the steep and slippery slope of his own demise. The portrait of Dorian Gray reveals his inner decay as he progressively becomes corrupted as the book goes on presenting themes of decay and corruption. ...read more.