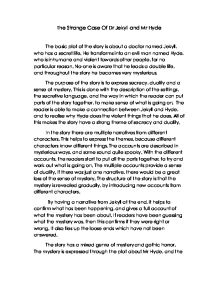 The Strange Case Of Dr Jekyll and Mr Hyde The basic plot of the story is about a doctor named Jekyll, who has a secret life. He transforms into an evil man named Hyde, who is inhumane and violent towards other people, for no particular reason. No-one is aware that he leads a double life, and throughout the story he becomes very mysterious. The purpose of the story is to express secrecy, duality and a sense of mystery. This is done with the description of the settings, the secretive language, and the way in which the reader can put parts of the story together, to make sense of what is going on. The reader is able to make a connection between Jekyll and Hyde, and to realise why Hyde does the violent things that he does. All of this makes the story have a strong theme of secrecy and duality. In the story there are multiple narratives from different characters. This helps to express the themes, because different characters know different things. The accounts are described in mysterious ways, and some sound quite spooky. ...read more.

"It was two storeys high; showed no window, nothing but a door." This shows secrecy because Hyde wants to be secluded, not seen, he wants no company and wants to keep to himself. Another point to show he wants to be left alone is where it says, "The door, which was equipped with neither bell nor knocker." This again shows that he wants no company and wants to be left alone. The next example, which shows secrecy, is the fog, when Utterson goes to Soho. The fog is described as, embattled vapours and swirling wreaths. Also it says "The fog lifted a little and showed him a dingy street." This portrays secrecy because it is as if the fog reveals to him the street as if he didn't know it was there. Another point of the fog being secretive is where it says "and the next moment the fog settled again upon the part. This was the home of Henry Jekyll's favourite." This shows secrecy as well because the fog has cut him off from everything else apart from this building which he goes into. ...read more.

Another moral idea is not to overlook anyone because they don't know if they lead double lives like in the story Utterson knew Jekyll and never could've guessed he could have done what he did. The message for the reader at the time was that the well respected gentlemen are not what they seem to be and should not be overlooked. The story is still relevant to the modern society because men are having affairs that people are not aware of, so this relates to the theme of duality which is expressed in the story. Also because of the moral decline in modern society the story is important because of the good men in the story, which relates to respectability which is shown in the story, for example Jekyll is well respected for being a well known doctor, however in modern times people are not very well respected because there are less morals and as people are turning to drugs or alcohols and the crime levels many people are not respected and possibly less, than in the story. Morals from the story involving secrecy and duality and nowadays I think they are still very valid. ...read more.