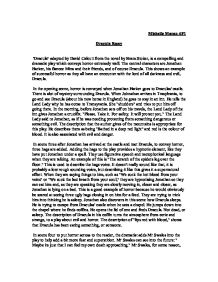 Dracula adapted by David Calcutt from the novel by Bram Stoker.

Michelle Moran 4F1 Dracula Essay 'Dracula" adapted by David Calcutt from the novel by Bram Stoker, is a compelling and dramatic play which conveys horror extremely well. The central characters are Jonathan Harker, his fiancee Mina and their friends, and of course Dracula. This shows an example of successful horror as they all have an encounter with the lord of all darkness and evil, Dracula. In the opening scene, horror is conveyed when Jonathan Harker goes to Draculas' castle. There is alot of mystery surrounding Dracula. When Johnathan arrives in Trasylvania, to go and see Dracula (about his new home in England) he goes to stay in an inn. He tells the Land Lady why he has come to Transyvania. She "shudders" and tries to put him off going there. In the morning, before Jonathan sets off on his travels, the Land Lady of the inn gives Jonathan a crucifix. "Please. Take it. For safety. It will protect you." The Land Lady said to Jonathan, as if he was needing protecting from something dangerous or something evil. The description that the author gives of the mountains is appropriate for this play. He describes them as being "Bathed in a deep red light" and red is the colour of blood. ...read more.

I think that this means Renfield is a vampire, also as vampires can only live from blood. In scene three, the dramatist shows an example of successful horror were Lucy Westenra, Mina's friend, meets Dracula. One night, Mina had awoken and found that Lucy was gone, and the window was open. Mina finds Lucy on the bench where Mr Swales used to sit, "as if she was......waiting for something......or someone." The description where Lucy meets Dracula is written well. Descriptions such as "Out of the shadows a figure approached her," and "I saw it's face. And it was the face of a beast." This gives the reader a scared feeling. If there was a strange figure of a person moving towards your best friend and when you finally found out the figure is a beast, you are bound to be scared! You would have a mixture of feelings. You would be really scared and shocked. Lucy also keeps seeing the figure of a man with red eyes. "The same face, the same red eyes!" The figure of the man she is seeing is Dracula. In scene four, Professor Van Helsing is introduced. This helps as he discovers from the wound on Lucys' neck, that she is the victim of a vampire. ...read more.

"The sky burst into flame, and he gave a cry, a long howl of anguish and pain and rage and despair" the repitition of "and" emphasises hoe much pain Dracula is going through at the end. All that was left of Dracula was dust. The ending is a repetition of when Mina was describing how she first became a vampire which emphaises the fact that Draculas' presence still lives on even though she has killed him and freed her soul from his grasp. The strengths of this play are the vivid descriptions and metephorical language such as that used by the hags at the beginning of the play and the description Lucy gives as her death approaches. The length is a weakness as you could get bored reading the play through as it is quite long but the introduction of characters who have a small part in the play could help the turn out of the whole play. The fact there is a lot of symbolism used in the description of some of the parts like when Lucy dies and Dracula is coming in on the "ship with ragged, tattered sails." This gives you a vivid picture in your mind. I thought that this was quite a good play as it had alot of interesting things happening in it and alot of vivid descriptions that help you understand the complex idea of a person being able to live forever. ...read more.

There is lots of good analysis in this essay but the response as a whole lacks focus; if looking at how a playwright has changed a novel to create certain effects, specific changes need to be referenced to show an understanding of the two different styles.
4 Stars