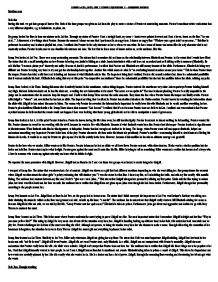 Drama GCSE (1699) Unit 2 Drama Exploration 2 - Response section Section one Task One During this task, we got into groups of four or five. Each of the four groups was given an Act from the play to create a statue of Proctor at contrasting moments. Proctor's emotions varied; each statue had a very different objective, e.g. to intimidate, to plead, etc. My group, looked for lines to base our statues on in Act One. Through my statue of Proctor- I had a straight back, my arms + hands were pointed forward and I had a frown, based on the line," be you deaf...", I discovered a few things about Proctor. Because the moment I chose was one that I preformed in an angry tone, I choose an angry line: "I'll show you a great doin' on you arse..." This line is preformed in mockery and is almost playful but, stern. I realized that Proctor is the only character so far to whom we can relate. He has a sense of humor and seems like the only character that is not constantly serious. Proctor is calm and we can visualize his entrance and aura. The fact that he has a sense of humor makes us, as the audience, like him. Group Two looked at Act Two. There were many contrasting moments. The statues that I remember did not focus on the relationship between Elizabeth and Proctor, to the extent that I would have liked. The statue that did a small investigation on how Proctor is feeling was Justin's: Sitting on a chair, hands interlocked with a soft face and an arched back as if talking softly to someone (Elizabeth). ...read more.

Similarly to Act Two, Miller only references Abigail not giving her any lines. The statue that I felt was most important: Abigail sobbing. Abigail had her head in her hands and said "no! He is dead". Abigail still loves Proctor. Abigail did not want Proctor dead, only Elizabeth. As a child, Abigail can not comprehend with Proctor's mentality. Abigail does not understand that Proctor really loves his wife, the affair was a mistake. Abigail can't accept that Proctor does not love her. The audience has to realize that Abigail did those things not to be popular or for fun. I feel that Abigail honestly wanted to hurt people. In act 2 and 4 Abigail has no lines but is mentioned and events- Elizabeth being taken to prison- a result of Abigail. This shows her importance and how events are carefully planned by her. She did exactly what she wanted to do. She is a leader and has a lot of power. Abigail, through the menacing lines warning and threatening her friends get what she wants. Task Two- Thought tracking We preformed scene one between Abigail and Proctor on pages 28 and 29. We thought tracked the two characters throughout the two pages. Both characters thought tracked many things. The important thoughts are: when Abigail touched Proctor's arm and said, "Give me a word John", we can assume that this is the first physical contact between the two after their affair. Two important thoughts from John: "I can't do it to Elizabeth; I have a family" and "She is so beautiful; nobody will find out"- both are opposites showing the division in Proctor's mind. At this point Proctor's mind is unstable. ...read more.

Furthermore, the affair is possibly why this whole episode is occurring. The audience has to realize Miller's political message. McCarthyism in 1950 was the justice court in Salem. The similarity between the play and political groups was that in Salem it was a witch hunt. McCarthyism was an attempt to find all communist sympathizers; the way of hunting down the sympathizers and witches were very similar. As Tituba was forced into telling a lie, so were many citizens of America. The citizens were threatened and scared for their well being, the only viable choice was to agree with what the investigator was saying. A key moment in the play was when Tituba confessed. As one of convicted confessed, there is no doubt in the minds of the court that there are witches or the parallel communist sympathizers. The interrogations are harsh as they really believe the theory, witchery or communism is in the community. At the point of confession there is no hope for any other convicted; everyone is guilty in the eyes of the investigators. Once the confession has been stated there can't be any negotiation. As we witnessed with Proctor's testament- the authorities'' opinions can't be changed. The play shows how just because one person was forced to tell a lie, many others have to suffer. We also see how blind and heartless justice is; the system has no reason, as they base their decisions on facts. Miller does not believe that communism was a threat. In Salem the girls are lying and the devil is not the threat. Miller is showing us that when we get scared, the result is paranoia; paranoia leads to a lack of rationality and poor decision making. One man in charge is wrong; we witnessed Danforth in charge- he made so many mistakes. McCarthy exploited fear and "The Crucible" is Miller's Protest. ...read more.