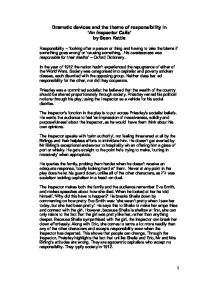 Dramatic devices and the theme of responsibility in 'An Inspector Calls'.

Dramatic devices and the theme of responsibility in 'An Inspector Calls' by Sean Kettle Responsibility - 'looking after a person or thing and having to take the blame if something goes wrong' or 'causing something, His carelessness was responsible for their deaths' - Oxford Dictionary. In the year of 1912 the nation hadn't experienced the repugnance of either of the World Wars. Society was categorised into capitalist and poverty stricken classes, each disunited with the opposing group. Neither class bared responsibility for the other, nor did they cooperate. Priestley was a committed socialist: he believed that the wealth of the country should be shared proportionately through society. Priestley vented his political notions through his play, using the Inspector as a vehicle for his social diatribe. The Inspector's function in the play is to put across Priestley's socialist beliefs. He wants the audience to feel 'an impression of massiveness, solidity and purposefulness' about the Inspector, as he would have them think about his own opinions. The Inspector speaks with 'calm authority', not feeling threatened at all by the Birlings and their helpless efforts to intimidate him. He doesn't get averted by Mr Birling's exceptional endeavour to hospitality when offering him a glass of port or whisky. He gets straight to the point he's trying to make, 'cutting in massively' when appropriate. He queries the family, probing them harder when he doesn't receive an adequate response, 'coolly looking hard at' them. ...read more.

speak 'somewhat impatiently', 'rather angrily', 'abruptly', 'cutting in', 'annoyed', 'haughtily', 'rebuking them', 'very sharply' and 'bitterly'. Overall they are very antisocial, thinking they can use their social status to intimidate people who pose a threat. Stage directions also state that Mrs Birling should 'stare at the Inspector angrily' as if trying to psych their visitor out, but without success. The Inspector's ability to overpower them is shown in stage directions too: 'he has a disconcerting habit of looking hard at the person he addresses before actually speaking,' and 'massively taking charge.' Some characters are shown to accept responsibility through the stage directions. For instance Sheila and Eric show 'genuine remorse' about the girl's death, contrasted with Birling who is 'uninterested'. He is a 'man of business' and is apathetic about the situation. Preistley is very careful to recreate 1912 exactly in terms of props and setting. The furniture is 'good and solid' and 'of the period'. The wedding ring Gerald presents Sheila with shows how materialistic the family are and how they perceive possessions and business propositions as a higher priority than sociability. Sheila and Gerald care more about their ring than their relationship. Even in his toast Birling informs his family of how he sees his daughter's marriage as a business opportunity, he doesn't once mention the sentimental side of it enthusiastically. At the end of the play Sheila rejects the ring, 'No, not yet. It's too soon', as she has accepted responsibility and has seen the error of her ways. Dramatic irony involves the audience. ...read more.

When he enters the scene the parents become far firmer with their children as if to show to the Inspector they have total control. The Inspector makes numerous commands to the family and retains order among the emotional havoc he causes. The use of short sentences is quite frequent, appearing mostly when the Inspector is questioning characters: they often answer simply yes or no. One exception is Mr Birling who usually goes on to talk about profit margins and his business. These keep the audience engrossed. The audience would not wish to hear the same two characters engaging in some tedious conversation. Instead they want language where everyone butts in and anyone could say anything at anytime changing the whole course of questioning the Inspector has to offer. This type of language keeps the audience awake. Through this play Priestley wanted his audience to understand his socialist views. He made them very clear through powerful dramatic devices such as lighting and dramatic irony, and not least through the Inspector, who is a key character dominating the minds of the family. Priestley argues that socialism was needed in those times and that history should not be allowed to repeat itself. He wanted his audience to know that it should not take two World Wars for the nation's classes to unite. There was no excuse for society to revert to its pre-war brainless class-divided status quo. At the same time, Priestley is successful in constructing a well-crafted three-act stage play with memorable characters and a good story. 1 ...read more.