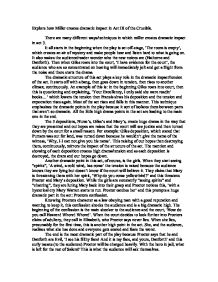 Dramatic Impact in Act 3 of The Crucible

Explore how Miller creates dramatic impact in Act III of the Crucible. There are many different ways/techniques in which miller creates dramatic impact in act 3. It all starts in the beginning when the play is set off-stage, 'The room is empty', which creates an air of mystery and make people hear and listen hard to what is going on. It also makes the audience/reader wonder who the new voices are (Hathorne and Danforth). Then when Giles roars into the court, 'I have evidence for the court', the audience who are so concentrated on hearing will immediately jolt and get a fright from the noise and there starts the drama. The dramatic structure of this act plays a key role in the dramatic impact/tension of the act. It starts off with a bang, then goes down in tension, then rises to another climax, continuously. An example of this is: in the beginning Giles roars into court, then this is questioning and explaining, 'Your Excellency, I only said she were readin' books...' which lowers the tension then Fransis shws his deposition and the tension and expectation rises again. ...read more.

They claim that Mary is threatening them with her spirit, 'Why do you come yellow bird?' and this threatens Proctor and Mary's deposition. While the girls are constantly "seeing spirits" and "chanting", they are luring Mary back into their grasp and Proctor notices this, 'with a hysterical cry Mary Warren starts to run. Proctor catches her' and this prompts a huge dramatic part in the act: Proctors confession. Knowing Proctors character as a law obeying man with a good reputation and wanting to keep it, this confession shocks the audience and is a big dramatic high. The beginning of the confession is the main shocker to the audience and the court, 'How do you call Heaven! Whore! Whore!'. When the court decides to look further into Proctors claim of adultery, they call in Elizabeth, who Proctor says never lies. When she lies, presumably for the first time, this is another high point in the act. She, and the audience, realizes what she has done and everyone gets scared and fears the worst. The end is the most dramatic part of the play because Proctor says that he and Danforth are Evil, 'I see his filthy face! ...read more.

With Danforth, especially him being in a position of extreme power, it is dramatic that we don't know what he is like. In the beginning of the play, we understood that Hale was a self important man who wanted to seem the hero and wasn't afraid to cry witchery on someone. During this act, he is defensive and doesn't exactly believe in all the 'witches'. It is al if he thinks he has caused all this and wants to fix it. 'Is every defense an attack upon the court?', 'Excellency, a moment. I think this goes to the heart of the matter'. He is starting to side more with Proctor in believing this is all the girls and they may have caused this. It his the last quote of Proctors sums up what is going on in act 3 and why it is so dramatic: 'You are pulling Heaven down and raising up a whore!'. We, as the audience, know things the characters don't (dramatic irony) and this is a great example. We know the girls are lying, but the court and many people don't, they believe the 'whore' and not 'heaven' (the whore being Abigail and Heaven being truth and righteousness). ...read more.

There are considerable strengths to this essay. The student clearly is very knowledgeable about the play and the events and the characters. The quotes have been selected carefully and appropriately. The weakness really comes from the lack of clarity of expression, with points not clearly framed to signal to the examiner that the student is commenting on a dramatic technique.